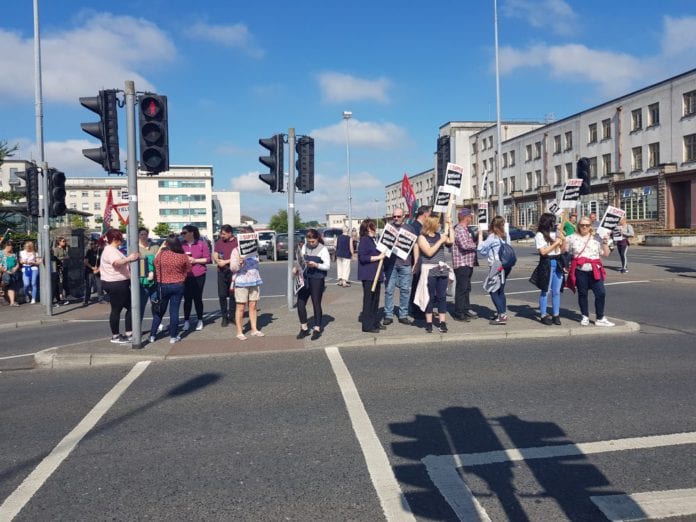 It was originally planned that Siptu members would strike for three days next Tuesday, Wednesday and Thursday with 10,000 health workers expected on the picket lines.

The Labour Court requested that the union defer next week’s strike to allow for a full hearing to take place which is scheduled for next Wednesday.

Siptu health division organiser Paul Bell said that “At the request of the Labour Court, Siptu representatives have agreed to defer strike action scheduled to start next Tuesday to allow for a full hearing to take place with no preconditions”.

Paul Bell praised the “unity and strength” displayed by SIPTU’s members on the picket lines during the week.

He said this unity and strength has demonstrated their determination to resolve this matter.

“Ultimately, our members will decide on the outcome of any recommendations that emerge from negotiations at the Labour Court, by way of a secret ballot.”

Minister for Housing Eoghan Murphy labelled this as a “positive development” saying that it would be good for patients.

The strike revolves around a conflict between SIPTU and the HSE over what SIPTU claims is the failure to allocate pay increases for its members stemming from a job evaluation scheme.

SIPTU maintains that the recommendations of the job evaluation scheme means raises of between€1,500 and €3,000 are due to many of its members.

Minister Eoghan Murphy was asked about the Department of Public Expenditure conceding and paying the increased wages following evaluations, to which he said that it would put increased pressure on public spending.

He said that the money wasn’t the government’s, but belonged to the tax payers and that it wasn’t a “bottomless pit”.

Minister for Health Simon Harris stated that service support staff have a fair point in relation to a number of their issues.

The Minister for Health called on the necessity for a negotiation about timelines for implementing the recommendations of the job evaluation scheme which found pay rises were warranted in some cases.

The strike being called off will come as welcome news to Galwegians with planned procedures at Galway University Hospital and Portiuncula Hospital Ballinasloe which have been effected by the strike.

Nationally, 2,000 patients had arranged appointments and procedures postponed this week due to the strike by the health service support staff.