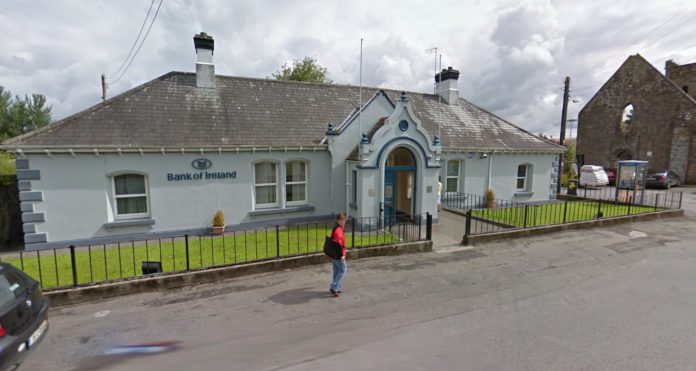 Three Bank of Ireland branches in Galway are closing for good today, as part of a nationwide shrinking of their operations.

The BOI branches in Dunmore, Ballygar, and Oughterard are among 88 around the country which will be shutting their doors today.

Galway TD Denis Naughten said that losing their bank branch is a “serious setback” for towns which were reinventing themselves before the pandemic hit.

He described today’s closures as a “huge blow to the communities serviced by these branches, making it far more difficult for them to recover after COVID”.

The closures by Bank of Ireland were announced back in March, as a response to losses of more than €740 million in 2020, and a growing shift towards online banking.

However, Denis Naughten said that online services have not been taken up by everyone, and not equally, which poses a problem.

“With 13% of people not using online banking, a figure that is even higher across regional Ireland, even a simple service such as the provision of 24 hour access to an ATM for both lodgements and withdrawals would make a big difference in helping these towns recover after Covid.”

Band of Ireland have also confirmed this week that some banking services will be available at post offices around the country.

Under a deal with An Post, BOI customers will be able to avail of cash lodgements and withdrawls, and cheque lodgements, at 923 post offices around Ireland.

Debbie Byrne, Managing Director of An Post Retail said “An Post continues to build a sustainable and successful national post office network that is modern, relevant, re-invigorated and providing community banking on the doorstep for the customers and communities we serve.

“We are delighted to provide this facility to Bank of Ireland customers to access their account, pay in cash and cheques, and withdraw money 6 days a week.”

Denis Naughten said that the sweeping closures by BOI, along with Ulster Bank’s withdrawal from Ireland, calls for the government to revisit the concept of a state bank for SMEs and personal customers.

“We have two distinct customer bases that are being excluded by the current two bank model in this country, namely personal customers and small businesses. Both elements need to be addressed in a new banking model.”

He added that the basic infrastructure for such a banking system already exists, but is currently fragmented

“Instead of a copy and paste model from some other country we should start with our credit unions, post offices and the two State banks, namely the Strategic Banking Corporation of Ireland and Microfinance Ireland.”

“So rather than trying to reinvent the wheel, we need to build on these key strengths and design an economic strategy for rebuilding our economy through our local businesses which are so important to recovery outside our cities.”

The Independent TD said that a Dáil Committee needs to be established to examine the creation of a state banking force in Ireland.