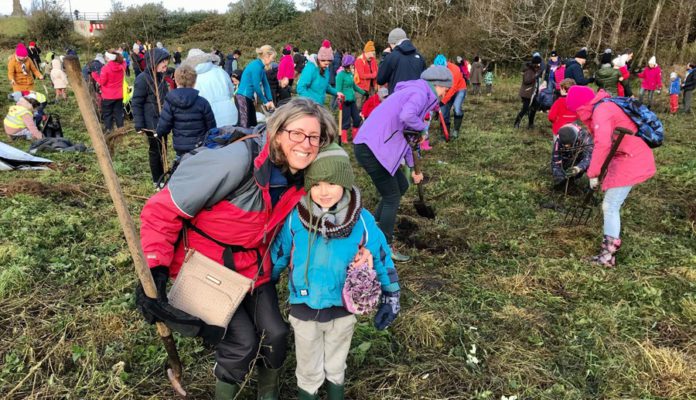 Terryland Forest Park has been honoured with a prestigious Pride of Place award for the work the community does in creating this incredible space for people to enjoy.

Tuatha of Terryland Forest Park in the city was the winner of the Creative Place Initiative at the awards this month, which praised its recreational, environmental, and educational value born of the sweat of community activists.

The Forest Park project first began in 1996, and is now Ireland’s largest urban public woodland project, covering an of over 120 acres.

Inside these woods can be found a range of diverse habitats including waterways, woods, meadows, pasture and limestone outcrops.

These provide essential sanctuary and habitats for a wide range of Irish flora and fauna.

The park was founded as a partnership between Galway City Council and representatives from the community, educational, scientific, artistic and environmental sectors to act as a ‘carbon sink’, a biodiversity sanctuary, an outdoor classroom and a recreational facility for Galwegians.

The judges of the Pride of Place awards said, “This group in partnership with their Council has created a bio-diversity sanctuary, that is at once educational, scientific and artistic”.

The judges gushed over the park, calling a “terrific example of how climate change can and is being tackled” in Ireland.

The project really got underway in March of 2000, when thousands of people of all ages came to plant the first trees.

Now the woodlands boasts an estimated 100,000 trees, an is kept in wonderful condition by the ongoing work of locals.

Brendan Smith of Terryland Forest Park Alliance said that the award, which is for the years 2021 due to COVID-19, honours the people who “kept the spirit of volunteerism alive” during the pandemic.

Writing on facebook he said “I would like to use this opportunity to sincerely thank Galway City Council for nominating our group with special recognition to Tiarnan McCusker and to all of the fantastic hardworking staff in the Parks Department”.

“Namely Stephen Walsh, Lisa Smyth, Kevin Nally, Edward Skehill, Mark Ryan, Pat Callanan and Paula Kearney as well as to the hundreds of volunteers and to the thousands of people who planted trees and flowers over the years.”

The IPB Pride of Place awards were first created in 2003 to recognise and reward the work that people do, coming together to improve their local communities.

It has since grown into the largest national competition honouring community development achievements.