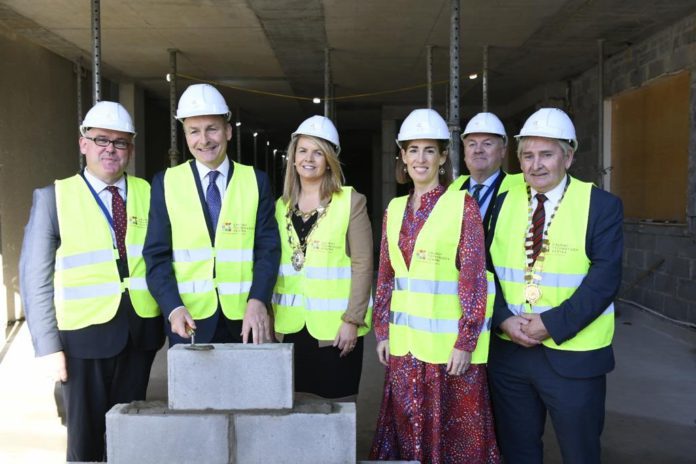 Taoiseach Micheál Martin has placed the first stone in a massive expansion of Galway Technology Centre in Mervue.

The expansion of the GTC is expected to enable the creation of 12,500 jobs over the next 15 years, along with attracting an estimated €1.4 billion in investments.

Speaking at the ceremony to mark the extension, Taoiseach Micheál Martin TD said, “Since its inception, Galway Technology Centre has played a central role in enabling the growth of scaling enterprises across the west of Ireland.”

“It has provided numerous start-ups and high potential businesses with the space and support they needed in order to flourish and prosper.”

“The centre has come a long way from its first opening in the mid-nineties, when there were eight units filled by seven start-up companies.”

“In the years since they have developed alongside the enterprises they have supported, providing greater space and resources as the need for their service has grown.”

When the work is complete, there will be a particular emphasis on facilitating rapid scaling for start-ups and other innovation driven enterprises in GTC, as well as ICT businesses in need of second sites.

The enhanced facility will also include further conferencing and meeting space, state of the art IT infrastructure as well as other digital amenities such as a video production and broadcasting suite.

Galway Technology Centre first opened in 1994, and in the years since has expanded several times.

Over that time it has housed more than 300 companies who have created in excess of 3,000 jobs.

Currently there are 41 companies in GTC with over 325 people employed directly on site and thousands more in the other satellite offices of these enterprises located in Ireland and abroad.