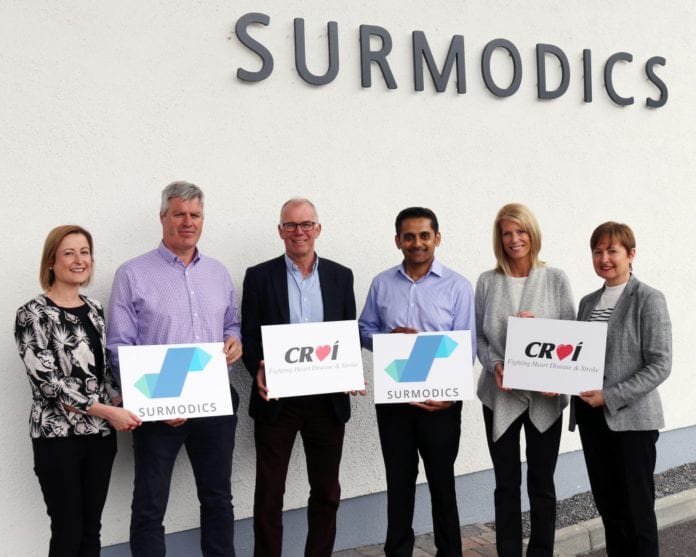 Surmodics will be supporting Croí’s efforts with financial support for their out of hospital stroke programme for the next five years.

Tom Greaney, Chief Operating Officer at Surmodics said that they were proud to “Support Croí’s mission to prevent disease, save lives and promote wellbeing, a mission that Surmodics as an organisation also shares.”

Surmodics is a global manufacturer of medical devices which owns a manufacturing facility in Ballinasloe which used to be Creagh Medical.

Stroke remains one of the leading causes of death worldwide, with an estimated 10,000 people affected in Ireland alone every year, as many as 7,000 of which require hospitalisation.

More than that, having a stroke is something that can continue to affect your health and lifestyle long after the event itself.

There are as many as 30,000 people living in Ireland with a disability they acquired from having a stroke, making it the leading cause of acquired disability in Ireland.

Kevin O’Reilly, Chairman of Croí, said that the organisation is deeply indebted to Surmodics for their five year commitment.

He said this will allow Croí to continue expanding their post-hospital discharge support programme for stroke survivors.

“In recent years, there have been significant advances made in hospital-based stroke care with many more people today surviving a stroke.”

However Mr Reilly added that the needs of stroke survivors after leaving hospital are varied and, “unfortunately at both a local and national level, community based supports are greatly in need of resources.”

In this time Croí plans to facilitate monthly support meetings in Galway and Mayo, as well as develop and test a self-management and self-care programme for survivors.

“Survivors have huge needs in term of physiotherapy, occupational therapy, speech therapy and psychological support and Croí’s efforts in this regard are in early stage development.”

Kevin O’Reilly finished by saying that this contribution from Surmodics will make a difference in the lives of hundreds of people in the community.