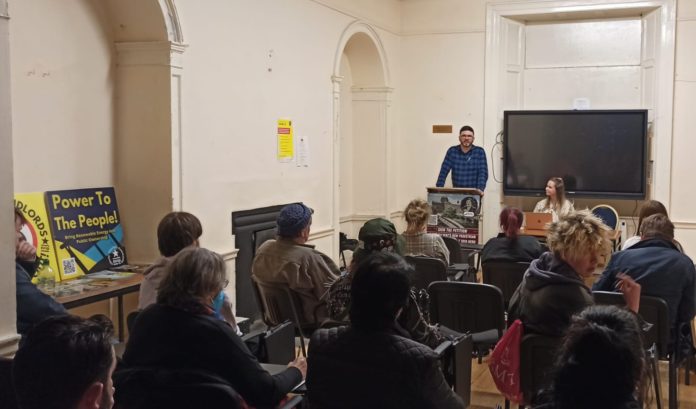 A successful public meeting was held as part of the ‘Julia Morrissey Bridge’ campaign by Éirígí For a New Republic this week.

The meeting in Áras na nGael on Dominick Street in Galway City was attended by around thirty people.

The campaign is calling for Galway’s new pedestrian and cycle bridge, adjacent to the existing Salmon Weir Bridge, to be named in honour of 1916 veteran Julia Morrissey.

The campaign includes an online petition, which has been signed almost 400 times.

Jamie is a PhD student in NUI Galway whose thesis, which is sponsored by the Irish Research Council, examines foster care in 20th century Ireland.

Her talk included some background on both Julia Morrissey and the Cumann na mBan movement in Galway during the revolutionary period.

Canavan spoke about the contrast between the role of women during the revolutionary period, and the treatment of women following the counter-revolution of 1922.

Speaking after the meeting, Ian Ó Dálaigh said that this is the first public meeting they have organised in Galway since before the pandemic, so “it was very encouraging to see a large crowd gather to discuss the Julia Morrissey Bridge campaign.”

“Many thanks to our guest speaker, Jamie Canavan, for her brilliant contribution,” he said.

For Éirígí, it’s really important that we try to honour a forgotten hero of the 1916 Rising – a Galway native and Cumann na mBan commander who, like so many other women, have been airbrushed out of history.

“We also want this campaign to spark a conversation about both the role of women during the revolutionary period, and about the nature of the counter-revolution that took place in Ireland 100 years ago.”