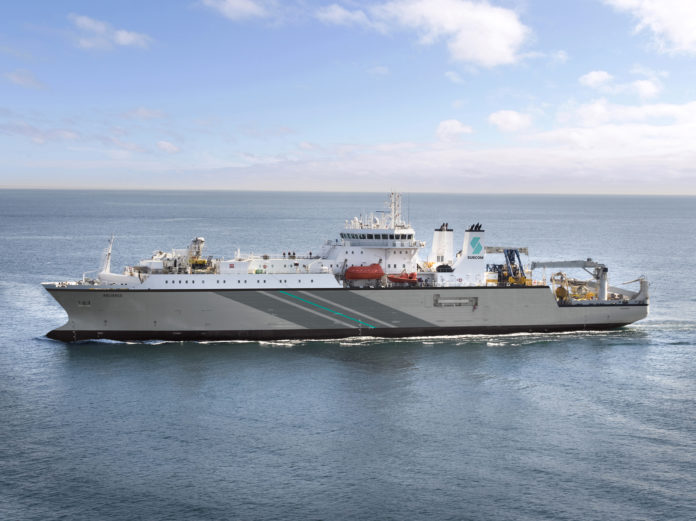 Galway will benefit from serving as the hub of a subsea telecoms cable connecting Ireland with Iceland, and onwards towards Denmark and the Nordics.

Ballyloughane Strand will serve as the landing site for this high capacity fibre optic telecoms cable which will serve as a “digital bridge” between Ireland and Iceland.

Farice already owns and operates two cable systems connecting Iceland with northern Europe, which this will tie into as a high speed network.

This major infrastructure project being by Farice is also expected to deliver additional high speed, high capacity connectivity for businesses in Galway through the open access fibre network.

Farice has signed a contract with SubCom, LLC, a global undersea fibre optic cable system supply company, to install the IRIS Cable System in the summer 2022.

Thorvardur Sveinsson, CEO of Farice said “We are pleased to announce the contract in force for the IRIS undersea cable system, which we believe is an essential step for both the safety and security of Iceland.”

He said that Ireland is ideal as it is a “nexus” of trans-Atlantic connections, and a centre of European operations for many international businesses.

Work on bringing the cable from Galway to the edge of the Irish continental shelf is expected to take just 15 days to complete when is does begin, laying roughly 20km a day at depths of up to 1,500m.

A foreshore licence was also submitted to the Department of the Environment, Housing, and Local government last month for the work that will be required to bring this cable ashore.

This comes after a subsea survey was carried out to select a route from Galway to Iceland last year by Irish company McMahon Design & Management Limited.

Tom McMahon, Managing Director of McMahon Design & Management Limited, said that Galway was chosen as the landing zone for this cable due to multiple favourable coastal conditions.

There are already multiple subsea cable landing zones in Ireland he said, but these are concentrated in Dublin and Wexford, and are becoming quite crowded.

Galway had a promising marine approach on initial examination he said, which led to a full marine survey being carried out last year from Ballyloughane strand, across the Atlantic half way to Iceland.

Based on this survey they chose a route that had promising physical conditions, in that the cable could be easily buried roughly a metre deep using a marine plough, and wouldn’t impact other marine uses.

“There are lots of other marine interests, in particular fishing, and we always stay out of fishing grounds as best as we can, and if we have to go near them we skirt around the outsides.”

Other screening is done “to make sure you don’t go through any areas of coral, or any significant features on the seabed that might have any environmental associations.”

“Likewise marine archaeology is a huge part. All of our marine surveys make that we do not route our cable through any areas of archaeological significance, any wrecks or anything like that.”

It is hoped that once the foreshore licence application is progressed over the next 12 months, that work on the shore connection at Ballyloughane Strand will take place in April and May of 2022.

He said that this project “opens up capacity” for additional high speed, high capacity, connections across the country to Dublin and into the Nordics.

“Which is crucial for third level institutes, for large high-tech industries, and filtering all the way down to SMEs and down to the local level ultimately.”

Tom said that this is due to the fact that it operates an “open access” system where any party can gain access to the fibre system. Especially crucial at a time when the pandemic has made it more important than ever to enable businesses to online connectivity.