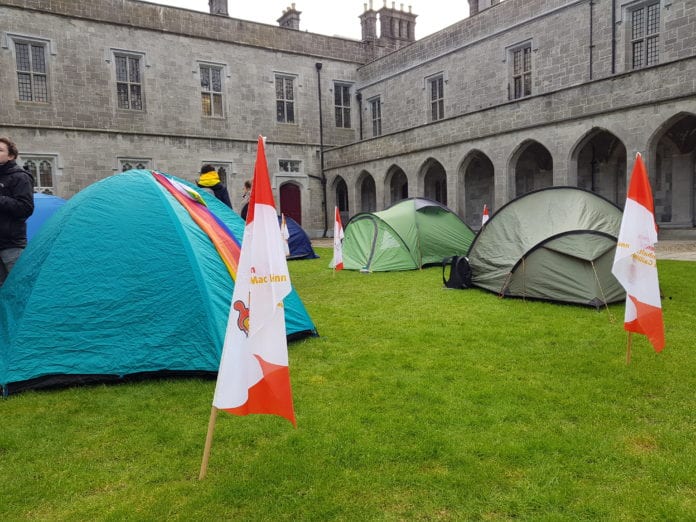 Students from NUI Galway are camping out in the university quadrangle this evening in protest against a 4% rent increase at campus accommodation.

NUI Galway announced last week that it would be implementing a rent increase in response to increased management costs.

The 4% hike at NUIG is the maximum allowed in a rent pressure zone, and mirrors a move by UCD to impose a 12% increase over the next three years.

Cian Mortimer, one of the students organising the protest, said the move to up the cost of student accommodation makes it harder for people who want to come to NUIG.

“NUI Galway attracts students from all over the country, but if someone from Donegal can’t afford to pay for accommodation in Galway they’ll just have to turn down their offer.”

This is a significant barrier to accessing education Cian said, adding that more and more people are having to commute from significant distances.

The group had a very positive meeting with university president Professor Ciarán Ó hÓgartaigh this afternoon where the university expressed its support for the protest.

He said President Ó hÓgartaigh will be meeting with the subsidiary company responsible for the campus accommodation in the next week or two in the hopes of having this decision reversed.

Despite this show of support, the protesters will be remaining camped out on the Quadrangle tonight, and possibly beyond that.

“The President has given us his support, but we’re continuing on the protest until we something more concrete.”

They are looking for “a definite commitment to not increasing rents,” Cian added.

The protest is being supported by the Students Union at NUI Galway.

When the rent increase was announced the SU said the university was taking advantage of students and their families who are already struggling with the cost of rent.

An online petition calling on the university to revoke the 4% rent increase started by the SU has so far achieved just under 2,000 signatures.

Students at UCD have set up a similar camp out this evening, joining those down in Cork at UCC who have been in their tents since Tuesday.