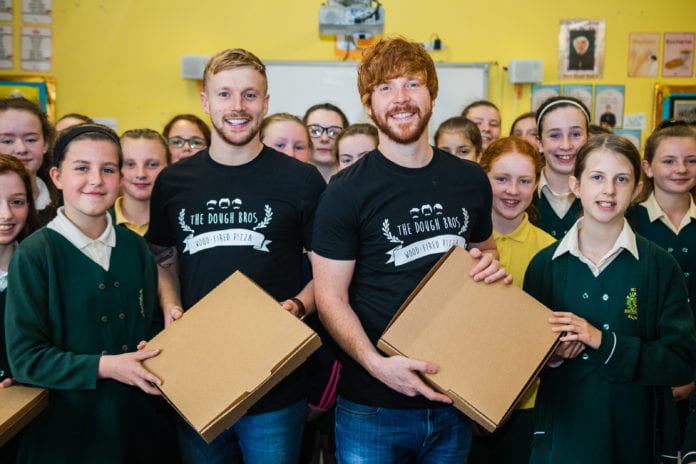 Primary school students from Scoil Ide in Salthill have inspired The Dough Bros to become more sustainable – by writing a letter to its owners.

The students who were looking at more sustainable business practices hand-wrote letters to some of their favourite places to eat in Galway, and the Dough Bros were the only business to respond and to take action.

The aim was to get businesses to start using biodegradable cutlery, napkins, pizza boxes and brown bags.

“I was blown away by the letter. So much so as soon as I read it I put it down, I ran down to a local cafe Gerona. I knew they were using compostable disposables and asked for information on the supplier,” said Eugene Greaney, co-owner of The Dough Bros.

“Within 20 minutes I had rang the Vegware and arranged a meeting and a quotation on changing our cutlery, napkins and brown bags that we serve our pizzas on.

“We use Two Hundred Thousand brown bags alone each year. This letter really made us think here, we need to be more sustainable in our business, it is up to us to be the change.

“I think this letter really showed us that there is power in people and we can all be the difference we wish to see.”

Eugene said that up until that point, becoming more sustainable was a goal for the Dough Bros, but it was also on the long finger.

“The passionate letter from the Sixth-class students was the kick up the arse that we needed,” he said.

“We were so moved that we felt a duty to act on it for them.

“It’s as much about being sustainable as showing them the kids that they have a voice and they can make the difference.

Ronan Greaney, co-owner of The Dough Bros, said: “The students in Scoil Ide are our customers and we are so encouraged to see this next generation taking action and telling us how to be better.

“Since the letter arrived we have all been buzzing and are loving the change to be better to the environment and to leave less impact on it each and every day.”

The Dough Bros will be changing to to fully compostable knives and forks (100,000 units of each per year) instead of using plastic ones.

“It’s a huge shift and it comes with a cost, but it’s not all bad,” said Eugene.

“The cutlery for example is four times the price but we will encourage people to use less, it’s up to us to educate our staff and customers. As a leading business in Galway and one that particularly the kids look up to we have a responsibility.

“We must lead by example. That simple letter has made us realise that. It has made us make the change and we hope that we now can inspire other businesses follow suit.”

Ms Conneelly, Sixth Class teacher at Scoil Ide said that the Dough Bros were top of the list when the class was asked about their favourite place to eat.

“We asked, hey, are they doing as they should with their packaging etc?

“The class were so happy to see a response and also the lads being so generous also sent out vouchers for us all to eat there.

“The response alone was good but the fact that the students can see that they made real changes happen will only showcase to them that each and every one of them can make change happen,” she said.