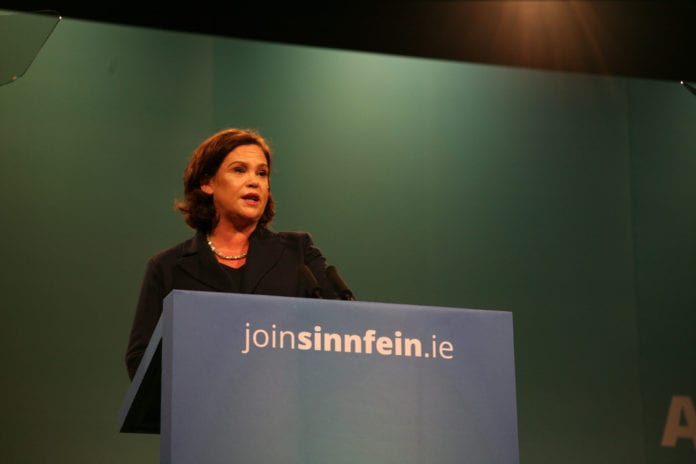 The Sinn Féin leadership has today sent out a strong message that the Eighth Amendment should be repealed, arguing that it should never have been placed in the Constitution.

The party’s President Mary Lou McDonald set out her strong views in the Dáil in the debate on the Referendum Bill, saying the ‘Eighth Amendment is a relic of an Ireland of the past’ and that ‘it has to go’.

Gerry Adams commended the government on the proposed wording of the referendum, adding that the issue of women’s health ‘should never be a matter for a constitution’.

Mary Lou McDonald said: “The 8th Amendment should never have been placed in our Constitution. Bitter experience over decades demonstrates this.”

She continued by highlighting the reality of the impact of the Eighth Amendment on the health and lives of women.

“It is essential to recall real cost to women and girls of the Eighth amendment. In the 1992 X-Case, a suicidal girl of 14, the child victim of a rape, was prevented by the High Court from travelling abroad to obtain an abortion.

“It has caused countless women and families with the trauma of a diagnosis of fatal foetal abnormality to be forced to make a harrowing journey abroad.

“It has created an alphabet roll call of women’s suffering, women who in many cases sought relief in international courts and tribunals to recognise their suffering and the cruelty of our state.

“It cost the life of Savita Halappanavar in 2012 while miscarrying was denied an abortion that could have saved her life. She died after doctors refused to carry out the necessary procedure due to the legal ambiguity and uncertainty created by the 8th Amendment.

“In 2015, a pregnant mother was kept on life-support for 24 days after she was declared medically brain-dead because a foetal heartbeat was detected in her womb. When her family asked that life support be removed, their request was denied because of the 8th Amendment, despite the fact that the baby had no chance of survival. It took a legal appeal by her family to High Court for her life support to be switched off.

“Our bad law made these cases. I say that these women are, in the first instance, the reason to repeal the 8th Amendment. We as a society must demand and ensure that there are no more hard cases, no more Savita’s and no more traumatised women known to us in the public domain as letters of the alphabet.

“That is our first duty, to assert clearly that that the state will not force a rape victim to carry a pregnancy to term.

“To demand that women and families faced with the devastating diagnosis of fatal foetal abnormality are no longer denied care, comfort and choice here in their home country.

“To assert that doctors must be free to do their job, must be able to take medical decisions in the interests of women without the threat of a criminal sanction hanging over them.

“To ensure that health care choices, life and death decisions, are not skewed or delayed while medics seek advice from constitutional lawyers.”

The President of Sinn Féin concluded:“The 8th Amendment is a relic of an Ireland of the past. Yet, it restricts the rights of women in the here and now and affects our future in such a profound way. It has to go.

“It is time to trust women. It is time to allow doctors to do their jobs. And we, as legislators, must now do ours.”

Gerry Adams TD also spoke in the Dáil today in the debate on the Referendum Bill.

He pointed out, that in his own constituency of Louth and East Meath, 83 women travelled to Britain for an abortion in 2016. This suggests that in the last 40 years at least 3300 women travelled for abortions during that time from Louth.

“The referendum to repeal the 8th amendment is fundamentally about trust.

“First and foremost, it is about the willingness of our society to trust women to make health decisions for themselves.

“It is also about trusting our medical professionals faced with difficult situations and decisions.

“And it’s about trusting the electorate to come to a decision that removes from the constitution an amendment which should never have been placed there in the first instance.

“The issue of women’s health should never be a matter for a constitution.

“It should be legislated for in the normal way through the Oireachtas. I want to welcome the publication today of the government’s Policy Paper. Sinn Féin will study it closely. I want to commend the government on the proposed wording for the referendum.

“It places responsibility for legislating and providing for women’s health where it belongs – with the Oireachtas and the government. The 8th amendment prohibits access to basic medical treatment that should be available to women in any developed society.

“It is unjust and we as legislators have a responsibility to end that injustice. The business of the State should be to ensure women have access to proper health care services if they need them and if they choose to avail of them.

“The State has a responsibility to support women.

“None of us should try to fool ourselves. Abortion is a reality in this state. Every day here and in neighbouring states Irish women are having abortions. Ten will leave today and every day for that reason.

“It is estimated that in the last forty years at least one hundred and seventy thousand Irish women travelled to other states for abortions. That means as many as 3300 women travelled for abortions during that time from Louth. Thousands more are now using abortion pills that can be accessed over the internet. They do so without medical supervision.

“The Minister for Health speaking in the Dáil in January revealed a 62% increase in the number of women from this state contacting one online provider over a five-year period.

“So do we want this to continue or do we want a mature society, tolerant and compassionate, open and inclusive and based on equality?

“Or are the attitudes from the time of the industrial schools, the Magdalene laundries, and the Mother and Baby Homes, are those attitudes to prevail when women were treated as chattels, with no rights or protections.

“If we vote no we will be dismissing and condemning women.  The victims of rape, of incest, women with fatal foetal abnormalities are not anonymous people.

“They are not statistics. These are our family members, our friends and neighbours, our workmates. They need to be treated with love and compassion.

“Winning this referendum will take hard work and leadership.

“I would also appeal for a reasoned, respectful, and sympathetic debate. We must not – we cannot let women down again.

“The Sinn Féin leader, Mary Lou McDonald speaking on this issue in January described the eighth amendment as a ‘constitutional coup and the reactionary codification of the suppression of women’. She is right. That suppression has to end.