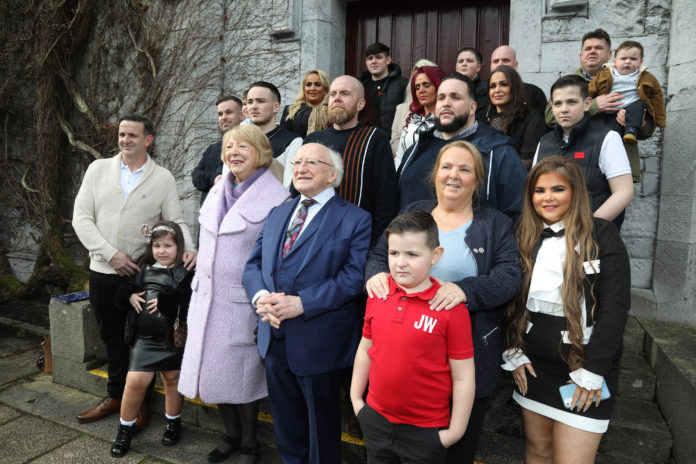 President of Ireland Michael D Higgins led the opening of the week-long celebrations with a keynote address, exploring rights and other issues for the Traveller community.

He said that he was delighted to be opening the Traveller Ethnicity Day Celebrations, hosted again this year by NUI Galway.

“The series of events planned during the week is so impressive and I commend the organisers for developing the programme,” said President Higgins.

The president said that today is a day to ‘celebrate the rich and ancient history of Ireland’s Traveller community’ – who constitute Ireland’s only indigenous minority.

“Today is a day to take stock on how far we have come as a society that recognises and values the Traveller traditions and culture, but it is also a day to consider the road still ahead to full participation and equality,” he said.

Irish Traveller Ethnicity Day on March 1 marks the anniversary of when the government formally recognised Irish Travellers as a distinct ethnic group.

“Our university community has defined respect and openness as two of our core values, and through collective effort across many different initiatives, we are meeting the challenge of making our community a more equal, inclusive and diverse place in which to work and study,” added NUI Galway president, Professor Ciarán Ó hÓgartaigh.

The MMIE project is about empowering Irish Travellers to transition and build a sense of belonging in higher education.

The launch included the presentation of the Michael McDonagh Award for Traveller Ally Excellence, named in honour of the Irish Traveller and rights campaigner. The awardees were NUI Galway lecturers Dr Deirdre Hardiman and Dr Helen Casey.

The week-long events include panel discussions on the need for Irish Traveller Allies; the Traveller Culture and History in Education Bill 2018; Gypsy, Roma and Irish Traveller LGBT+ people’s experience within their communities; and the criminalisation of nomadism from a UK and Irish perspective.

Workshops and cultural exhibitions will also offer a variety of opportunities for staff, students and the public to discover more about Irish Traveller culture and history.

Some of the highlights include the award-winning play Magpies on the Pylon by Michael Collins; photographs from the well-known Crown exhibition showing Irish Traveller women and their hair; and the Irish Traveller Living Exhibition which was hosted on campus today outside Áras na Mac Léinn and includes a fully restored Barrel Top Wagon.

For further information and links to register for events at www.nuigalway.ie/accesscentre/travellereducationofficer