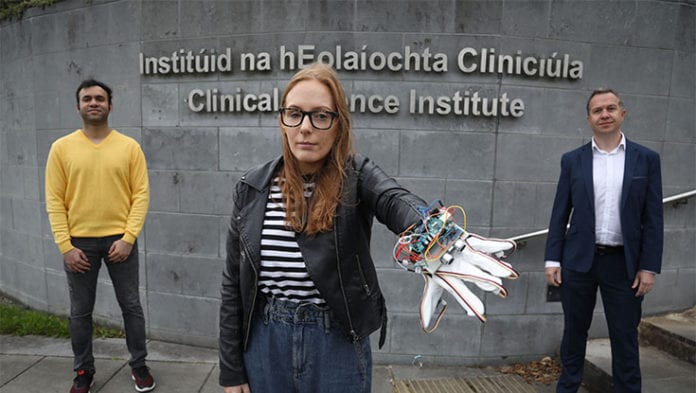 Researchers at NUI Galway has developed a new bit of technology they call the JediGlove to help people with a visual impairment find things with their hands.

This bit of wearable medical technology uses echolocation and vibrating sensors in the glove to let people sense objects in their path.

It sends micro-vibrations through the users’ fingers and thumb proportional to an object’s distance, helping people to gauge where an object is.

“We have nicknamed the device the JediGlove because it lets someone who is visually impaired ‘feel the force’ of objects in their environment,” said Derek O’Keeffe, Professor of Medical Device Technology at NUIG.

This device has “significant potential” beyond just the medical application of helping people with sight problems. he said.

“Not only can it help people with visual impairment but it could also have applications for first responders in emergency situations, like firemen and rescue teams entering buildings and environments that may have low visibility.”

Professor O’Keeffe worked with Mouzzam Hussain, who is studying a Masters in Biomedical Engineering at NUI Galway, to develop the concept.

“The JediGlove has been an exciting project to be involved with,” he said, “putting patients’ needs first in a way that allows me to use my hardware and software skills to help them in their daily routines.”

“It is very gratifying to work on something that will directly benefit someone in such a unique and tangible way.”

Sinead Hanrahan, a patient with visual impairment, was one of the first to test the technology, and said the device works very well.

“There are so many technological solutions for other parts of my life but for mobility there’s only two options to help me be more independent – the cane and a guide dog.”

“I don’t have a guide dog yet and I don’t particularly like the cane so it is nice to think I could have other options to help with my mobility,” Sinead said, calling the device a “game changer” that can reduce her need to rely on other people.

How likely are blackouts this Winter?