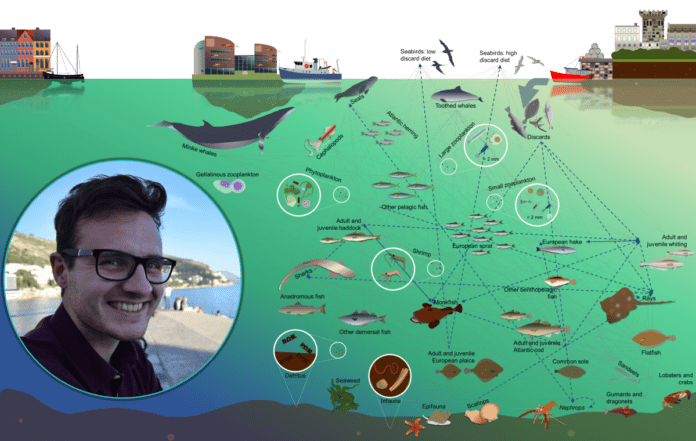 Almost everyone has heard of the concept of the food chain, at the very least just to use it in some really bad metaphors, but the reality of who eats who in an ecosystem is really closer to a tangled Food Web.

However human activity such as overfishing has had a colossal impact on the natural Food Web of the Irish Sea, made worse by the fact that we don’t fully understand the ecosystem we’re damaging, let alone what all the effects could be,

Jacob Bentley is a PhD student at the Scottish Association for Marine Science, and Cullen Fellow at Galway’s Marine Institute who has been deeply analysing Ireland’s marine ecosystems for almost five years.

While working with the Marine Institute based in Oranmore, Jacob has been working with different scientists and fishermen to build a working food web model of the Irish Sea and all the critters that call it home.

“Food webs describe who eats whom. Made of interconnected food chains, food webs help us understand how any changes in the ecosystem can affect many different species,” Jacob explains.

The model of the Irish Sea includes everything from plankton to sharks, but places a strong emphasis on commercially fished species such as cod, plaice, whiting, and haddock.

Over the past century the commercial fish and shellfish stocks in the Irish Sea have changed dramatically.

Cod, whiting and sole have been in decline and have failed to recover in the region despite a reduced fishing effort.

It’s hoped that by using this model to better understand the ecosystem we’re fishing in, we can better manage fish stocks in a sustainable way.

This project grew out of the first International Council for the Exploration of the Sea (ICES) Working Group called WKIrish, set up in 2015 to integrate ecosystem information into the assessment of commercial fish stocks.

Jacob has been working with WKIrish to build a food web model of the Irish Sea, by using information shared by fishermen and scientists as well as traditional fisheries data.

“Having scientists and fishermen work together to create the Irish Sea model, strengthens this relationship and also builds a roadmap for future collaboration,” Jacob said.

“This new food web model is a tool for exploring the past, present and future consequences of management decisions and factors such as climate change.”

“The model will also be able to provide temporal advice for sustainable fisheries management and species conservation.”

Jacob Bentley said that is has been a massive honour to help chart the ecosystem of the Irish Sea, but also a huge challenge, requiring the development of completely novel research methods.

One of the biggest benefits to the last few years of his work, Jacob added, has been collaborating with the people at the Marine Institute.

“Their research expertise and relationships with the fishing industry have been fundamental to my project.”

“They are also supportive, providing help with research dissemination and making me aware of new opportunities for my personal development as an early career researcher.”

The Cullen Fellowship Programme builds marine research capacity and capability by equipping graduates with the skills and expertise in raising awareness about our ocean, as well as Ireland’s rich marine biodiversity and ecosystems.

The programme has provided grant aid to the value of €2.06 million supporting twenty-four PhD and three MSc students over the last five years