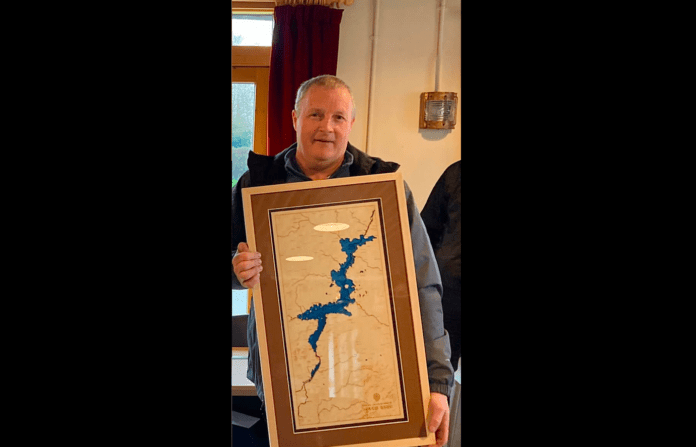 Twelve years is a long time to give over to anything, even if its for something that you love.

But giving over a chunk of your life to difficult and potentially lifesaving work is something that demands recognition.

That was the case with the retirement of Dom Sharkey, who stood down from the Lough Derg RNLI after 12 years with the station earlier this year.

Dom, a carpenter and master craftsman who works in building and renovation is recognized as a valued member of the RNLI team at Lough Derg.

Following his final exercises at the end of February, the other volunteers held a surprise leaving party for Dom at Lough Derg Yacht Club.

There he was presented with a beautiful woodcut by artist Henri Bocxe of the lake he has spent so many years safeguarding.

Ger Egan, senior helm at Lough Derg RNLI said of Dom that he was a “committed and dependable volunteer, humble and selfless.”

“Totally focused on whatever challenges a rescue threw at him, he was a huge asset to have at Lough Derg RNLI and will be greatly missed”.

Dom’s calm and considered approach to the challenges faced by crew when out on a shout earned the deep respect of his fellow volunteers.

Many new crew have benefited from his in-depth knowledge of both the theoretical and practical essentials in being a lifeboat volunteer as well as his understanding of the delights and vagaries of the lake.

For his own part, Dom reflected on how much it meant to him to be a part of such an important and vital service, and the friends he made being part of the RNLI station crew.

But saying goodbye does not necessarily mean the end of things, and Dom did not rule out returning to the RNLI when his professional life was less busy.