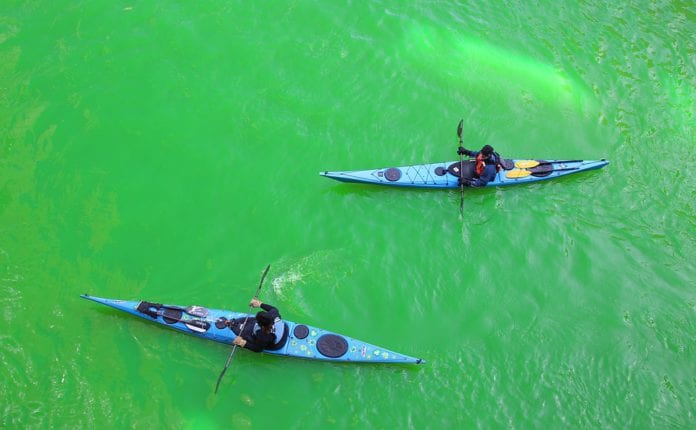 The River Corrib could be dyed green next year during the St. Patrick’s Day festivities.

This follows the confirmation that there are plans to dye the Liffey in Dublin green during the festival in 2020 should the local authorities agree to it.

Chicago has been dying its river green for decades using an environmentally safe, vegetable-based dye.

Niall Gibbons, CEO of Tourism Ireland confirmed the plans to the Irish Examiner and Galway-native Senator Billy Lawless, with links to Chicago, said that consideration is being given to whether it would be possible in Galway.

The Chicago River which runs through the Windy City has been dyed green every year since 1962.

One of the reasons for dying the river was that it was an polluted eyesore with sewage.

The authorities thought that colouring the river would pinpoint the exact places where waste was being discarded into the waterway.

Locals got their first look at the colored river when the city poured 100 pounds of the original chemicals into the water.

While the river remained green for an entire week back then in Chicago, the method of dying the river has changed, and if the Corrib was to be dyed green next year, it would only remain that way for about five hours.