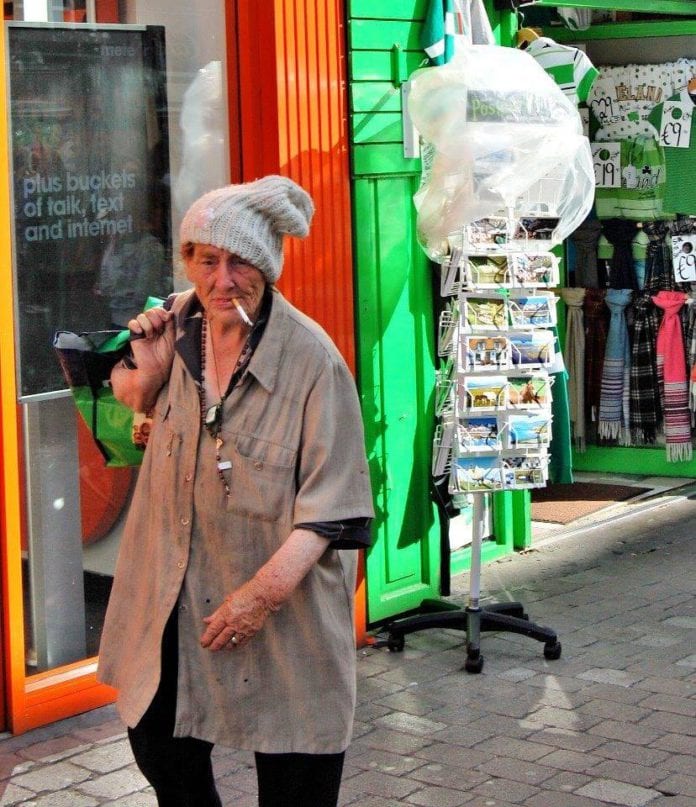 A famous figure known for wandering the city streets with her trademark cigarette dangling from her lips, Nora will be sorely missed by the Galway community.

She is remembered by residents as a ‘funny’ and ‘chatty’ character and a fixture of the city.

Nearly every Galwegian has a story about Nora – and many posted on Facebook with their memories.

Dee Linnane commented, “One day when I was very sad outside UHG about my Dad being so sick she gave me a relic and said she would pray for me. It meant so much to me.”

Michael Regan said, “Great memories ‘How ya? Are ya workin – have you any money ha! Ha!’ With humor and dignity and a smile on her face with the cigarette at the side of her lips.

“May she Rest In Peace a great soul.”

Laura O’Brien commented: “Sleep well Nora. The whole of Galway has memories of you and not too many people can say that.”

Ruth Howard remembered when she was a student and Nora asked her for a smoke.

After giving her a few cigarettes, they got to chatting and Nora gave her €2 for a cup of coffee.

“What a character,” Ruth said.

“Galway just won’t be the same without her,” commented Sarah O’Toole.

Joe Loughnane said: “A Galway legend, she was someone I’d seen around town ever since I could walk.

“She was quintessentially Galway, in every way.”

Nora Collins is survived by her daughter Mary, son-in-law Michael, and brother Denis, as well as by her grandchildren, great-grandchildren, nieces, nephews, and many other family members and friends.

She is reposing this Sunday January 6th from 4pm in Conneely’s Funeral Home on Flood Street.

Removal at 6pm to the Sacred Heart Church on Seamus Quirke Road.

Mass will be held on Monday January 7th at 10am, and funeral afterwards to Rahoon Cemetery.