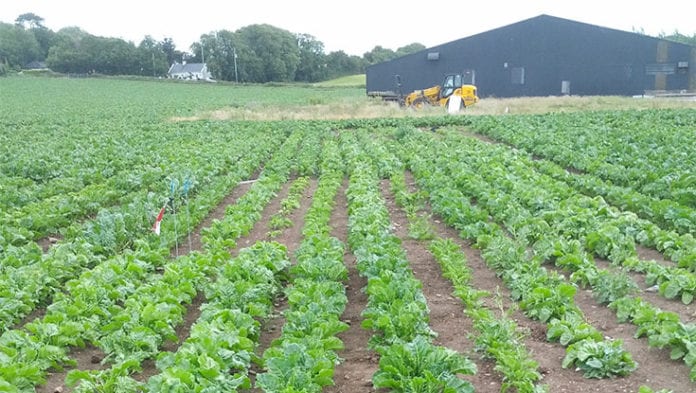 The newly published research shows how to breed strains of beets that can grow more food per hectare, while requiring less resources.

The research was carried out using a combination of molecular genetics work in a lab, and large scale field trials conducted in Cork.

One of the researchers on the project, PhD student Brendan Hallahan, said that recent leaps in genetic science and technology have made their work possible.

“Over the past decade, our ability to harness genetics to accelerate the breeding and improvement of crops has taken a quantum leap.”

A new generation of sustainable beet crops could be a great asset in Ireland and beyond, he said.

Every year, the world consumes 185 million tonnes of sugar that comes from one of two crops: the sugar beet, or sugar cane.

Sugar beets used to be widely cultivated in Ireland and the industry was a major part of the economy up until the early 21st century.

The first sugar beet refinery in in Ireland was built in Mountmellick in Laois back in 1851.

After independence, the state owned Irish Sugar Manufacturing Company opened its first factory in Carlow in 1926, followed by more in Tuam, Mallow, and Thurles.

The last sugar beet processing factory in Ireland closed in 2006, leaving any farmers still trying to grow beets with nowhere to sell them.

However the abolition of EU sugar quotas in 2017, and the growth of groups like Beet Ireland who are pushing the beet as an environmentally friendly crop in line with Common Agricultural Policy eco measures, could mean there’s hope for the beet.

Professor Charles Spillane, Director of the Ryan Institute at NUIG insists the value of the beet and sugar as a whole isn’t just for sweetening food.

“Sugar beet processing factories are now designed as sugar beet ‘biorefineries’ where sugar is but one of the many bioproducts generated, along with many non-food products such as specialty high-value chemicals, bio-based materials and bioenergy that can displace fossil-fuel derived products.”

Using sugar beet ‘biorefineries’ could play an important role in reducing the carbon footprint of the agricultural sector, he insists.

This is an important goal to aim for at a time when Ireland is on track to fall wildly short of its climate change and decabonisation goals.

The Ryan Institute is working on developing a range of projects to use sugar beets to produce valuable high-end chemicals and other products.

This research, funded by Science Foundation Ireland and the Irish Research Council, can be read in full in BMC Plant Biology.