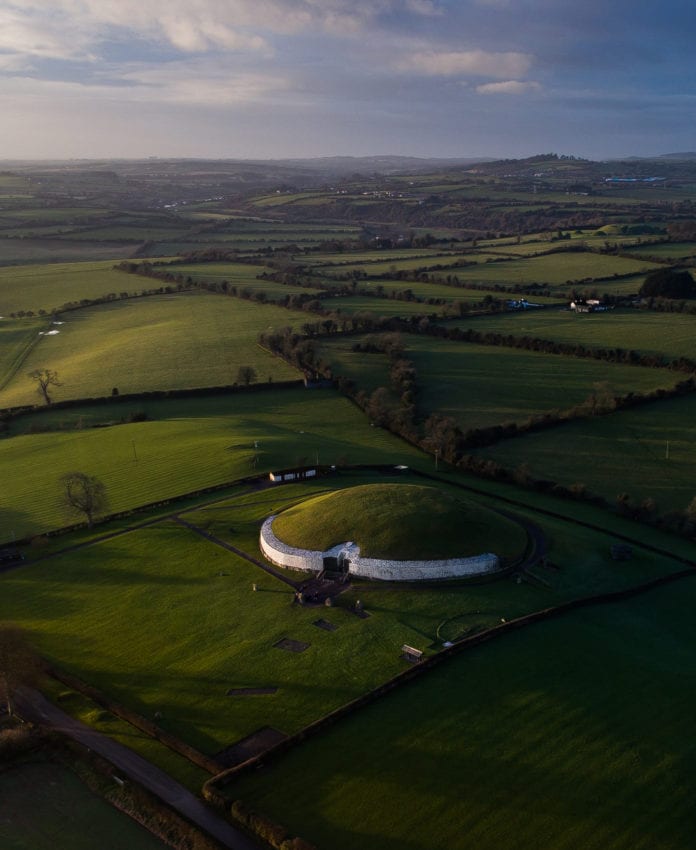 Research into a man buried in the Newgrange passage tomb indicates that he was born to first-degree incest, suggesting he was a member of the ruling social elite similar to the Egyptian pharaohs.

The research into the earliest periods of Ireland’s human history was carried out by a team led by TCD, along with colleagues from a number of universities including NUI Galway.

The survey of ancient Irish genomes shows that the man who was buried in the Newgrange chamber had parents who were first-degree relatives.

Older than the pyramids, Newgrange passage tomb is famous for its annual solar alignment where the winter solstice sunrise illuminates its sacred inner chamber in a golden blast of light.

However, little is known about who was interred in the heart of this imposing 200,000 tonne monument or of the Neolithic society which built it over 5,000 years ago.

“I’d never seen anything like it,” said Dr Lara Cassidy, Trinity, first author of the paper.

“We all inherit two copies of the genome, one from our mother and one from our father; well, this individual’s copies were extremely similar, a tell-tale sign of close inbreeding.

“In fact, our analyses allowed us to confirm that his parents were first-degree relatives.”

Brother and sister unions are a universal taboo for cultural and biological reasons and the only confirmed social acceptances of first-degree incest are found among the elites – typically within royal families.

By breaking the rules, the elite separates itself from the general population, intensifying hierarchy and legitimizing power. Public ritual and extravagant monumental architecture often co-occur with dynastic incest, to achieve the same ends.

“Here the auspicious location of the male skeletal remains is matched by the unprecedented nature of his ancient genome,” said Professor of Population Genetics at Trinity, Dan Bradley.

“The prestige of the burial makes this very likely a socially sanctioned union and speaks of a hierarchy so extreme that the only partners worthy of the elite were family members.”

The team also unearthed a web of distant familial relations between this man and other individuals from sites of the passage tomb tradition across the country, namely the mega-cemeteries of Carrowmore and Carrowkeel in Co. Sligo, and the Millin Bay monument in Co. Down.

“It seems what we have here is a powerful extended kin-group, who had access to elite burial sites in many regions of the island for at least half a millennium,” added Dr Cassidy.

Interestingly, one of the authors of the study, Dr Ros Ó Maoldúin, a Senior Archaeologist with Archaeological Management Solutions who received his PhD from NUI Galway recognised that a medieval myth resonates with these results and with the Newgrange solar phenomenon.

First recorded in the 11th century AD, four millennia after construction, the story tells of a builder-king who restarted the daily solar cycle by sleeping with his sister. The Middle Irish place name for the neighbouring Dowth passage tomb, Fertae Chuile, is based on this lore and can be translated as ‘Hill of Sin’.

“Given the world-famous solstice alignments of Brú na Bóinne, the magical solar manipulations in this myth already had scholars questioning how long an oral tradition could survive,” said Dr Ó Maoldúin. “To now discover a potential prehistoric precedent for the incestuous aspect is extraordinary.”

The genome survey stretched over two millennia and unearthed other unexpected results. Within the oldest known burial structure on the island, Poulnabrone portal tomb, the earliest yet diagnosed case of Down Syndrome was discovered in a male infant who was buried there five and a half thousand years ago.

Isotope analyses of this infant showed a dietary signature of breastfeeding. In combination, this provides an indication that visible difference was not a barrier to prestige burial in the deep past.

Other significant findings came from the analyses of individuals buried in the Parknabinnia court tomb which was excavated by a team led by NUI Galway archaeologist Dr Carleton Jones.

Here, a significant difference in the frequency of two Y chromosome haplogroups was found between individuals buried in the Parknabinnia monument and those buried in the nearby Poulnabrone portal tomb which suggests that distinct male line descent groups built and used these monuments.

This is a remarkable discovery as the use of these two monuments overlapped for several centuries and they are both located on the Burren only 10km apart.

The people who built and used both Parknabinnia and Poulnabrone were some of the earliest farmers in Ireland, descended from groups that arrived in Ireland shortly after 4000 BC, but what became of the earlier hunter-gatherer groups that inhabited Ireland for many thousands of years before these farmers arrived has long been an open question.

One of the individuals from Parknabinnia tested in this study goes some of the way to answering this interesting question.

“This individual could trace their ancestry to both the newly arrived farmers and to the indigenous hunter-gatherers of Ireland, showing that at least some mixing of these disparate populations occurred”, said Dr Carleton Jones.

Genomes from the rare remains of Irish hunter-gatherers themselves showed they were most closely related to the hunter-gatherer populations from Britain (e.g. Cheddar Man) and northwest mainland Europe.

However, unlike British samples, these earliest Irelanders had the genetic imprint of a prolonged island isolation. This fits with what we know about prehistoric sea levels after the Ice Age: Britain maintained a land bridge to the continent long after the retreat of the glaciers, while Ireland was separated by sea and its small early populations must have arrived in primitive boats.