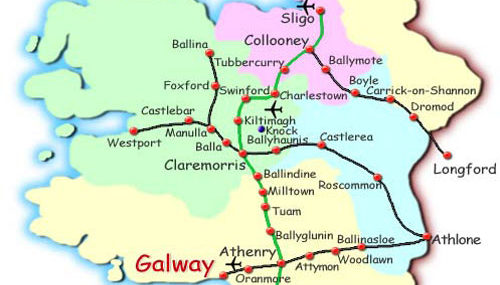 A Galway East TD has welcomed the publication of the Bradley Report on the feasibility of the Western Rail Corridor Phase 2 and Phase 3.

Seán Canney said that the report sets out the capital cost of €154 million and demonstrates a cost benefit greater than 1.0 which meets the public spending code.

“The long-term benefits of the railway are also clearly demonstrated in this report for towns such as Tuam,” said the Independent TD.

“This project will set the tone for Regional Development and Climate Action as this project brings economic benefits. This project is shovel ready and could be up and running by 2025.”

Deputy Canney says that he trusts the Government will take this study seriously which was researched by Dr John Bradley, a researcher at the ERSI.

“The Government need to ensure delivery of this project by including it in the National Development Plan,” he added.

“It is essential infrastructure in order to deliver the aspirations of the Atlantic Economic Corridor (AEC) including balanced development.

“Towns like Tuam, Athenry and Claremorris will benefit enormously with the development of public transport, rail freight and tourism potential for the region.

“The project ticks all the Climate Action boxes by removing cars and lorries from our roads and providing connectivity between our towns and cities including Westport, Ballina, Claremorris, Tuam, Galway, Limerick, Cork and Waterford.”