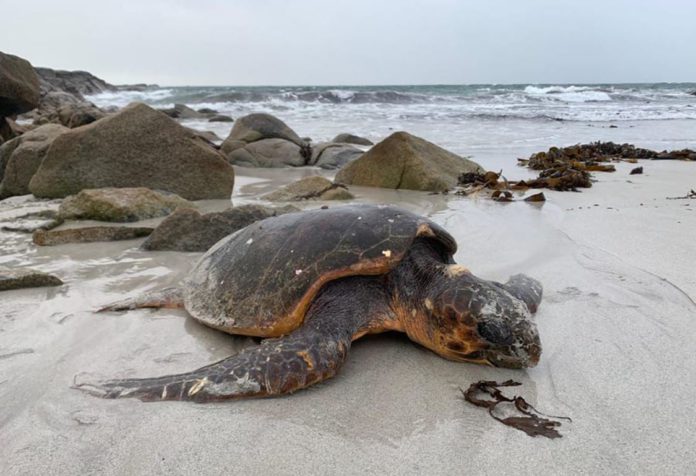 An endangered Loggerhead Turtle who washed up comatose on the shores of Connemara has tragically died despite the best efforts of Galway Atlantaquaria and other specialists to save her.

The 50kg turtle, native to warmer climates, was found by a couple out walking on the beach near Carna last week, and is believed to have been blown off course by Storm Barra.

The couple contacted the Irish Whale and Dolphin Group about what to do, and the unconscious turtle was brought to Galway Atlantaquaria.

When she arrived there the turtle was in a comatose state brought on by cold shock, and aquarium staff have been working these past few days to try and raise her temperature slowly.

Sadly, she never regained consciousness, and the Aquarium said yesterday that the turtle had died.

“We are deeply saddened to share the news that the adult female loggerhead turtle, brought to the aquarium last week has passed away,” Galway Atlantaquaria said in an update on facebook.

“Though every effort was made to save her life, she never regained consciousness. A full post-mortem will take place in the coming weeks.”

“We would like to thank all those involved in her care. Special thanks to Dr. Rita Gately, Dr. Linsey Cox from Gorteen Acre Vets & all the staff at Ark Vets Galway Knocknacarra.”

“We would also like to thank everyone for their kind messages of support over the last week.