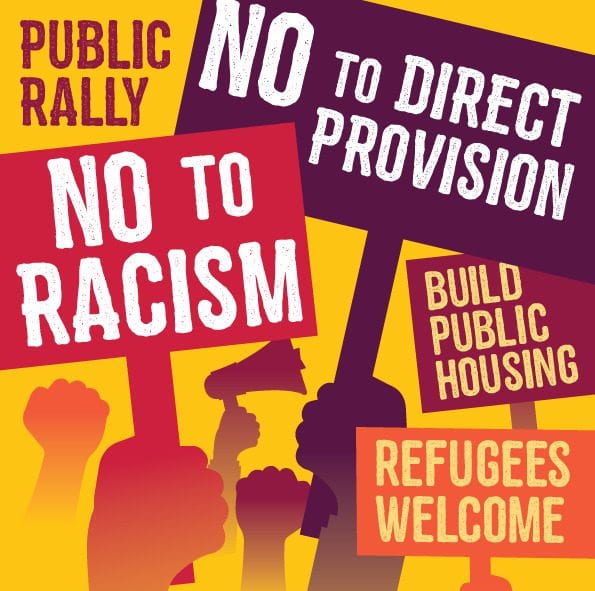 The Galway Anti-Racism Network are holding a public rally in Galway city next weekend to protest the “inhuman” Direct Provision system and condemning racism.

The rally is being held in Eyre Square next Satuday, September 28 starting at 4pm, with the residents of the Great Western Direct Provision Centre expected to join the protest.

From Eyre Square the protesters will march to the Spanish Arch, where speeches will he made, before heading to the Eglinton Direct Provision Centre in Salthill.

GARN have said that the rally is about unity against “rising racism” and the “inhumane Direct Provision system” which endures 20 years after being created as a temporary solution.

“Direct Provision is a cruel and inhumane asylum system that warehouses asylum seekers outside of communities, denying them basic rights and forcing them to live off less than €40 a week,” Joe Loughnane, GARN co-chairperson, said.

“People with residency are stuck in centres because of the inefficiency of the system and a worsening housing crisis.

“These centres are mostly privately run where the owners turn over a huge profit with contracts from the Government.”

“The secretive tendering process to find new centres is focused on mostly rural towns where absolutely no consultation is carried out, and no acknowledgement of the lack of basic resources that many of these towns’ experience.”

It had been planned for this protest to occur earlier in the day, but it was rescheduled to accommodate a protest in Oughterard earlier that day at 11:30am.

Oughterard has become a flashpoint for immigration and direct provision debates in Galway and nationwide following protests over possible plans for a centre at the long vacant Connemara Gateway Hotel.

Locals with legitimate concerns about the ability of the town’s infrastructure to cope with a large influx of people being kept penned in a single complex have had their voices muddled by right wing activists who have attempted to hijack the issue.

Galway West TD Noel Grealish made national headlines at a public meeting in Oughterard when he said that asylum seekers from Africa are all economic migrants coming to “sponge off the system”.

Joe Loughnane said that the vacuum created by a lack of consultation with local communities over the placement of direct provision centres and the settling of refugees has enabled far right activists to profit from the “misery of asylum seekers and the frustration of rural Ireland”.

GARN said that a expansive public housing programme is needed so that refugees can live as part of the community rather than being segregated in direct provision centres.