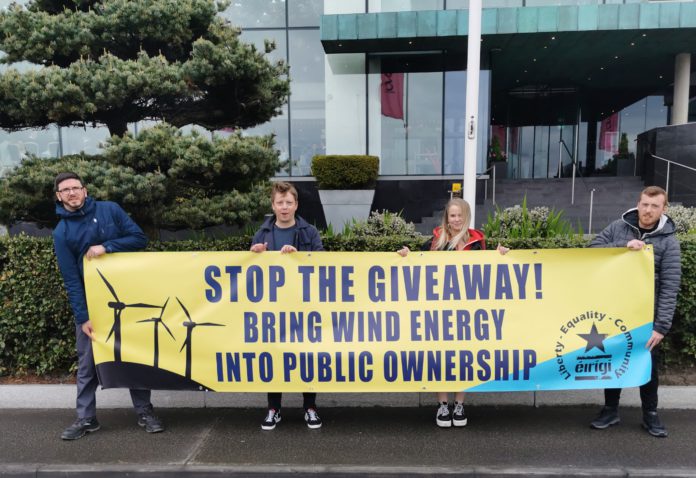 A protest has taken place outside ‘The Renewable Energy Opportunity for the West of Ireland’ conference, which took place yesterday, Thursday.

The conference in the G Hotel was organised by the Port of Galway and An Taoiseach Mícheál Martin gave the keynote address.

Also in attendance were representatives from Big Energy and other private corporations that want to profit from Ireland’s vast wind energy potential.

Speaking after the event, Éirígí’s Galway representative, Ian Ó Dálaigh, said that the conference put a heavy focus on the potential for offshore wind energy in the west of Ireland.

He said that in attendance were many high-ranking figures from big energy companies.

“It’s appalling that while ordinary working people are struggling to pay their energy bills – as a direct result of the energy policies of successive governments – Mícheál Martin is preparing the ground to hand the vast potential of Ireland’s offshore wind to private companies.”

He said that these companies are only interested in maximising their own profits, whereas the shift towards renewable energy should be about maximising the benefit for working people and the planet.

“Since our formation in 2006, Éirígí have opposed the giveaway of Ireland’s natural resources. At that time, the focus was on opposing the giveaway of the Corrib Gas Field,” said Ó Dálaigh.

“That giveaway was an outrageous decision, driven by a blind commitment to free-market economics above all else. But the giveaway of our wind energy will make Corrib look like a drop in the ocean.

“That’s why we called an emergency protest last Thursday – to highlight and oppose the giveaway. We want to help spark a national conversation about who owns the wind.”