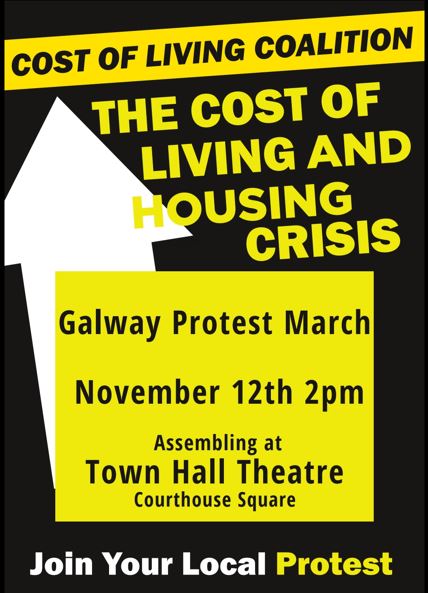 A protest against the escalating cost of living and housing crisis will begin at the Town Hall Theatre in Galway city on 12 November at 2pm.

Saturday’s protest, which will march to the Spanish Arch, comes after a demo in Dublin in September which saw over 15,000 people gather to demand a budget that ensures no one goes cold or hungry this winter.

It is being organised by the national Cost of Living Coalition, with involvement locally from several political and community groups including University of Galway Students’ Union, Galway Trades’ Council, Sinn Féin, People Before Profit, the Socialist Party and Access for All Galway.

Speakers at the protest will include Mairéad Farrell TD (SF), Adrian Curran (PBP) and representatives from the other groups involved.

“A recent study by Barnardos showed that one in four parents can’t afford to feed their kids because of the current cost of living crisis, a shocking statistic and all the more reason to join the Galway cost of living protest on Saturday November 12 at the Town Hall Theatre at 2pm,” said a spokesperson for the march.

“Our demands include price controls to reduce the price of energy and food, increases in social welfare, pensions and wages in line with inflation, freezing and reducing rents and providing adequate levels of HAP support, and stopping profiteering by energy and food companies by taking the sector into public ownership.”

They said that big numbers are needed on the streets of Galway and across the country next Saturday to make it clear to the government that nothing less than immediate and radical action on the cost of living and housing crises are acceptable.

“The march will take place against the backdrop of the COP27 summit in Egypt, reminding us that the cost of living and housing crisis and the climate and biodiversity crises are inextricably linked.

“It will see calls for the introduction of free, green and frequent public transport, the mass retrofitting of homes, the nationalisation of energy companies and a moratorium on the construction of electricity-guzzling data centres, measures that will benefit both working people and the planet.”