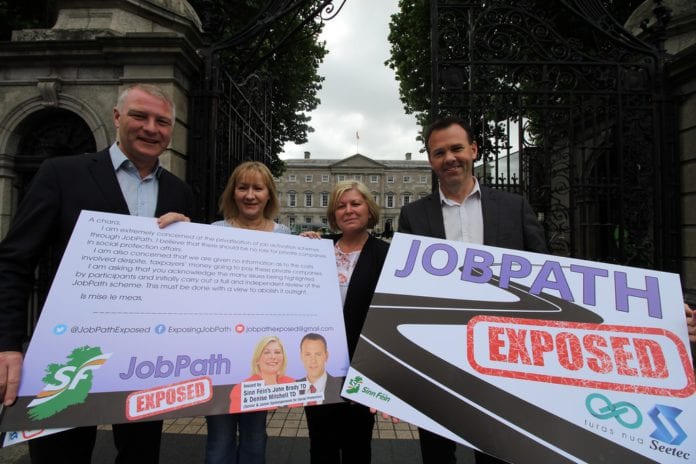 Senator Trevor Ó Clochartaigh has criticised Fianna Fáil and Fine Gael for not acknowledging the failures of the Jobpath scheme and for failing to support a motion in the Seanad for it to be discontinued.

Speaking on a Sinn Féin Private Members Bill to scrap the discredited, privatised job activation scheme, the Galway West – South Mayo Senator said that it is a disgrace that Fianna Fáil and Fine Gael continue to support a profit driven, privatised model of supports for unemployed people.

“It was telling that Labour party Senators, whose former Leader Joan Burton introduced the Thatcherite model, didn’t even bother to turn up for the debate in case they might have to justify why they brought it in when in Government.

“JobPath may look like just another job activation scheme aimed at getting jobseekers back to work, which runs alongside others such the Local Employment Service, Community Employment, Tús, Rural Social Scheme, and Gateway. However, JobPath’s set up and the way it operates makes it uniquely different.

“Any scheme that engages over 105,000 people is one that must be closely monitored. No two jobseekers are the same and therefore, a “one size fits all scheme” such as JobPath is entirely inadequate. Even if we set aside all of the issues experienced by JobPath participants, and the devastating impact that JobPath is having on the sustainability of other schemes such as CE and Tús, privatisation remains Sinn Féin’s fundamental concern.

“The secrecy, lack of transparency, and the supposed “commercial sensitivity” surrounding JobPath raises two key questions – how much of taxpayers’ money is being wasted on these private companies and what type of jobs are being sourced for jobseekers?

“Our Sinn Féin colleagues John Brady TD and Denise Mitchell TD have published a report called ‘Jobpath Exposed’ which gives testimony from participants and former employees of the companies administering Jobpath, which raises very serious questions about the way in which the scheme is being run.

“Our motion sought to discontinue this badly designed and poorly executed programme and Fianna Fáil and Fine Gael between them voted us down to ensure that it continue in its current format,” said Senator Ó Clochartaigh.