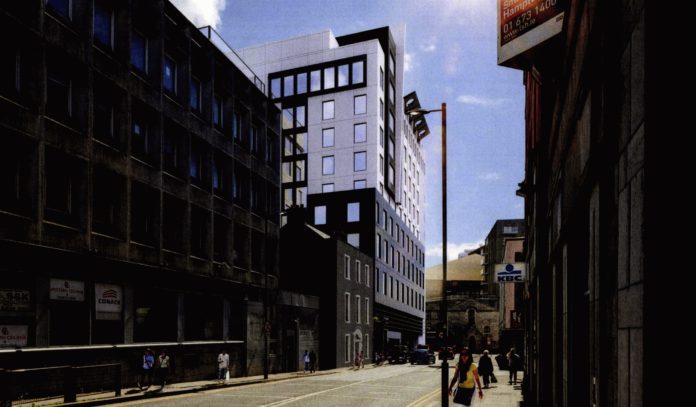 Planning permission is being sought from the city council for a massive extension to the Victoria Hotel in Galway City Centre.

An application has been made by Byrne Hotel Management to demolish the existing warehouse, restaurant and associated buildings next to the Victoria Hotel, which is located just south of Eyre Square.

In its place the developer intends to build a 10 to 11 storey extension to the existing hotel, which will add 109 additional guest bedrooms.

The new extension will also include a seating area and bars on the ground floor and first floor/mezzanine, along with another rooftop bar and lounge on the 10th floor.

Alterations will also be made to the premises of Victoria House on the same street to form part of the extended hotel, with new conference facilities.

A letter submitted with the planning application states that the Victoria Hotel is a boutique style venue, mainly for short stay guests who prize convenience.

“Most guests that visit Victoria Hotel arrive into Ceannt Station by train or bus, walk to the Victoria Hotel, check in, visit the bars then go out and wander the city centre”.

It added that there is a growing demand for short breaks in Galway, and that this hotel is ideally placed due to its location close to public transport and car parking options.

The existing Victoria Hotel is a six storey building, on Queen Street off Eyre Square, with 150 bed spaces and a bar/restaurant on the ground floor.

The owners have been steadily buying up the neighbouring properties on the street since 1999 with the goal of expanding the hotel.

“The design of the proposed development has sensitively incorporated the adjoining premises of Victoria House and the adjacent Archway Courtyard.”

“We propose connecting Victoria House to the main structure with a glass link corridor floating over the open cobblestone courtyard. This new public realm space will provide a breakout, outdoor lounge space.”

“To the rear of the development a pedestrian link corridor is planned from Ceannt Station which will lead directly into the mezzanine floor which connects to the reception lobby below.”

The letter goes on to state that the proposed rooftop bar and restaurant will provide a great viewpoint over the city, and that the modern extension will mesh well with the redevelopment of Ceannt Station.

A decision on this planning application is due from Galway City Council by February 21 of this year.