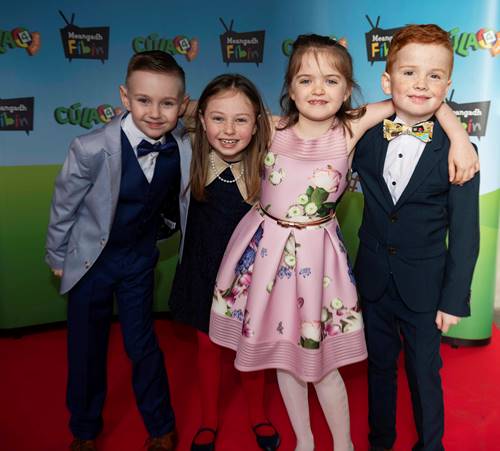 A new and original Irish language live action pre-school series produced by Meangadh Fíbín for TG4 was officially launched on Thursday in Galway’s Pálás Cinema where the young presenters took to the red carpet in an Oscars themed event.

Nationwide screenings will also take place in centres throughout the country.

Is Mise… follows four young presenters, as they discover the world from their own perspective.

It follows Ríona, Róisín, Joey and Cóil on various adventures as they learn and explore with activities ranging from a visit to the fire brigade team to flower making, from farming to a hip-hop dance lesson, and from kayaking to riding horses.

Each episode introduces a new experience relating to what children within this age group are interested in.

With fluent Irish speaking presenters from the Donegal, Connemara and Kerry Gaeltachts, each presenter brings their very own unique personality to the series as we follow them on their adventures.

Mary Bailey, producer with Meangadh Fíbín said: “We are extremely proud of this series for Cúla4 na nÓg and for the first time the channel will have a live action series presented by young presenters themselves as part of its schedule.

“It was our intention to produce entertaining content for a young audience and allow them to see their fellow peers as Irish speaking presenters.

“We thoroughly enjoyed making this series and we hope the young audience will enjoy it as much as we did.

“We are honoured and proud that TG4 will be doing a special broadcast of this series in its primetime schedule on the 18th of March as it will reflect the richness of the Irish language that is so evidently fastened in our young presenters.”

Is Mise was commissioned by TG4 with the generous help of the Section 481 film relief fund and it will air every Monday and Wednesday from Monday 11th March on Cúla4 na nÓg at 3pm.

A special broadcast, an episode featuring each young presenter, will air on Monday 18th March during TG4’s primetime schedule after the evening Nuacht, starting at 7:15pm.