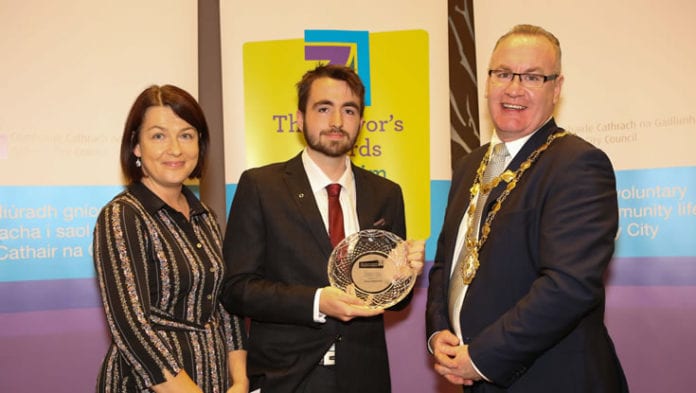 NUI Galway Student has just won the Mayor’s Award for Young Volunteer of the Year.

The Mayor’s Awards are a yearly initiative by Galway City Council to acknowledge voluntary work carried out by people within Galway City. The awards acknowledge

The Mayor of Galway City, Cllr. Pearce Flannery presented the top award to Jason in recognition of his voluntary effort and fundraising activities for a number of groups within Galway.

The awards acknowledge outstanding people and organisations that, throughout their commitment to participating in unpaid community and voluntary activities, have made a significant impact on the quality of their communities in Galway City.

Jason, from Galway City, recently completed the School Leavers Access Programme. He is a weekly charity shop volunteer with The Society of St.Vincent de Paul, where he sorts donations of books and clothing while helping customers as a sales team member.

Jason has volunteered for a number of Galway Charities supporting their fundraising events. The Galway Simon Community Sleep Out, Croí, The West of Ireland Cardiac Foundation Fun Run, and Ability West bag packing event have all hosted Jason as a volunteer.

He is also a volunteer with the Civil Defence, after recently completing the F.A.R course, the newest education and training standard to ensure volunteers can provide first aid for a person who becomes suddenly unwell or injured until the arrival of emergency medical services.

Jason said, “I learned to be more caring and giving, and learned to give back. I’ve learned to work as part of a team and to communicate effectively and to take criticism positively.”

Lorraine Tansey, NUI Galway Student Volunteer Coordinator, said: Students like Jason are willing to engage and we thank community projects in Galway for hosting students who are seeking to learn and bring their energy and enthusiasm.

Jason is keenly aware of the root issues facing communities and a critical citizen, which is what we strive for in higher education. The next generation are not only caring about social needs but striving to see changes.NUI