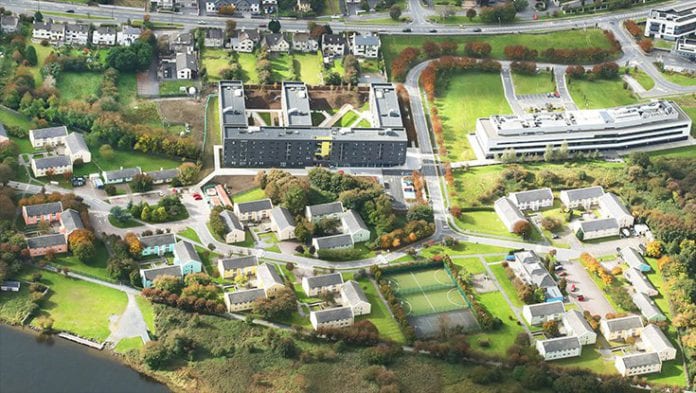 NUI Galway has been granted approval to use some of its new student accommodation for tourists during the holiday season.

The university applied to amend a condition of planning permission for the 429 bed Goldcrest Village in Dangan to allow tourists to stay there during the summer.

The student accommodation started accepting students last academic year, but at the time was only allowed to let students stay there between September 1 and May 15 of each year, and for conference delegates and short term student stays during the summer.

NUI Galway sought approval to let 34 apartments in Block A out to tourists during the academic term time.

One objection against the proposal was received from the Irish Hotels Federation, which said the industry is facing a number of challenges in Galway which this could exacerbate.

“The mix of accommodation in Galway city has a significant impact on the sustainability of the hotel and guesthouse sector which relies heavily on revenue generated in the peak summer months to support the year round viability of the sector”.

This would be “seriously undermined by any influx of student accommodation into the market for use as tourist/visitor accommodation outside the academic term during this period,” the IHF warned.

No physical work is intended to take place on the apartment building as part of this project, and NUIG said it would not constitute a “material alteration” to the scheme.

“The proposal represents a sustainable approach to the provision of additional bed spaces for visitors to Galway City during the high peak tourist season and it ensures optimum occupation of the development year round”.

One of those stated the complex can still only be used as student accommodation, or for the approved tourist use during academic holiday period.

“The development shall not be used for the purposes of other residential accommodation, such as hotel, hostel, apart-hotel, or similar use”.

It may also not have a “bar, function room or other elements commonly associated with hotel use” without a further grant of planning permission.

Michael Malone - September 26, 2022 0
TFI Local Link has announced that a new bus service linking Claremorris to Carraroe will begin next Monday, 3 October. The Route 431 service, which...