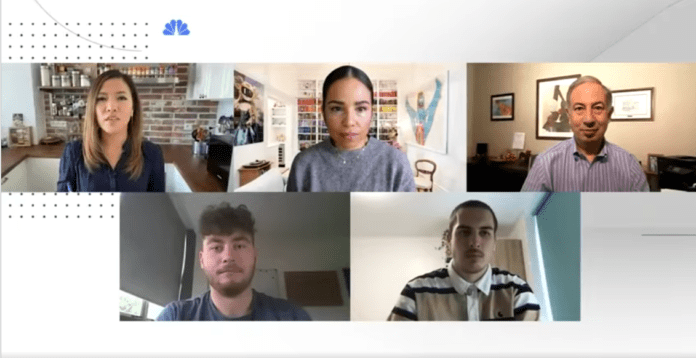 NUI Galway Students’ Union President Pádraic Toomey appeared on NBC News’ Global Hangout yesterday to talk about the gatherings of students in the city on Monday night, and what life is like on campus during the pandemic.

The engineering student at NUI Galway appeared in the discussion programme alongside a student from Manchester and two epidemiologists from the US.

Asked by NBC News‘ Correspondent Tesa Arcilla about the congregation of students and young people in the city on Monday night, Pádraic Toomey said that it was ‘unacceptable behaviour’ – but what happened must be put in context.

“At the same time, it was a small minority. It was a couple of hundred students in a city of over 30,000 students,” he said.

He also described the bad behaviour as being part of a ‘perfect storm’ – as the government announced that colleges wouldn’t be opening properly after people had already moved to the city.

“It was the perfect evening in the fact that it was very dry, it was very nice to be outside so there were a lot of people drinking in an area called the Spanish Arch which is an area known for a bit of outdoor drinking,” he said.

“But it went a bit too far and a lot gathered – and it was scary for the neighbours.”

Responding to Tesa Arcilla’s question about Senator Ollie Crowe who suggested the army be called in, Pádraic said that it was sensationalist, and not the right thing to do.

“There were also calls for water cannons to be put there to water blast students away or something, and for the police to be giving the names and addresses … to NUIG. There are legal issues with that too,” added the NUI Galway Students’ Union president.

“So there were calls which were too threatening, it goes against the idea that we’re in this together, that we can do the right thing and we can work on it and we can be part of the solution.”

Watch the full Global Hangout below, where Pádraic also discusses life on campus during the pandemic.

WATCH: A student in Ireland describes life on campus during the coronavirus pandemic.