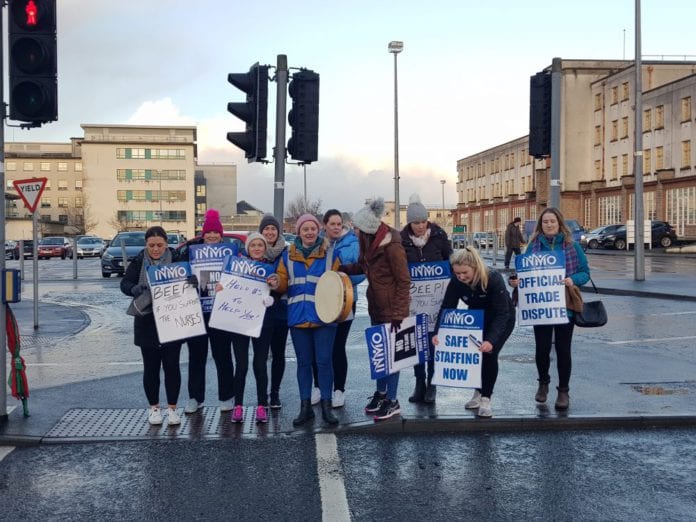 Nurses and Midwives took to the same pickets in Galway today for their third day of strikes with no end in sight.

Public expressions of support remained strong for nurses protesting outside University Hospital Galway today at the end of the first week of industrial action.

Nurses are striking over and working conditions which they have led to a serious staffing crisis at hospitals that is putting patient safety at risk.

The ongoing standoff if having a serious knock on effect for patients as the HSE has said that 80,000 appointments have no been cancelled as a result of the strikes.

But the INMO has been resolute that this is about long term patient care, and that ongoing understaffing poses a serious threat to patient safety.

Feelings of anger are running strong over feeling that the government is refusing to engage in a meaningful dialogue to solve the crisis.

General Secretary of the INMO Phil Ní Sheaghdha has said the union has received no further communication from the government aimed at resolving the dispute.

Nurses are seeking a 12 percent pay increase to bring them inline with other professionals like physiotherapists.

Both Health Minister Simon Harris and Minister for Public Expenditure Pascal Donoghue have said this week that they cannot cave on pay demands that go outside of the public sector pay deal.