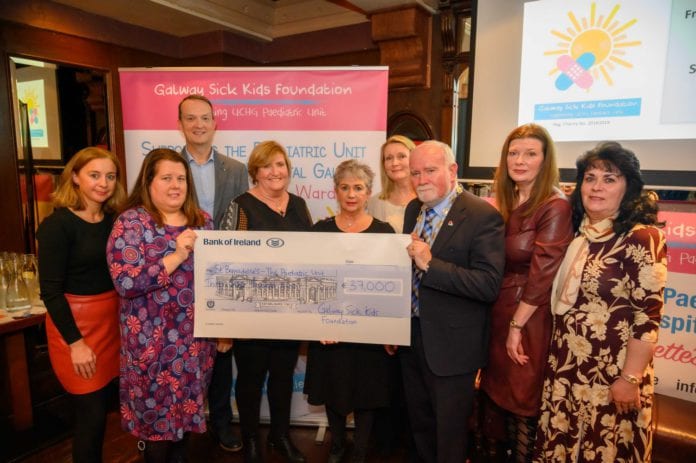 A new charity created to support the Pediatric Unit at University Hospital Galway launched on Wednesday with a €37,000 donation.

The Galway Sick Kids Foundation was created to raise funds for the St. Bernadettes’ Pediatric Unit at UHG.

The foundation was first established in 2017 and achieved charitable status in March of last year.

Earlier this year Galway Sick Kids was chosen as the preferred charity partners of Knocknacarra FC.

This week it was officially launched at an event in Tom Sheridans Knocknacarra where staff from the charity presented a cheque for €37,000 to staff at St. Bernadettes’.

“A big thank you to Martin and the team at Tom Sheridans Knocknacarra for sponsoring the launch,” said Foundation Chairperson Denise Holland.

Currently the foundation is working on two main projects, the refurbishment of the children’s bathroom for special needs and the redecoration of the entrance, corridors and examination rooms.

The total fundraising goal for these two projects is €40,000.

While there are a number of fundraising events planned over the next few weeks the committee are looking forward to the inaugural ball at The Galmont in Galway, on Friday June 12th 2020.

Man to ne sentenced after pleading guilty to knife offence

Progression of plans for new elective hospital for Galway welcomed

Briain Kelly - December 7, 2022 0
The announcement that the government has signed off on a site for a new elective hospital in Galway has been welcomed by the Saolta...

Man to ne sentenced after pleading guilty to knife offence