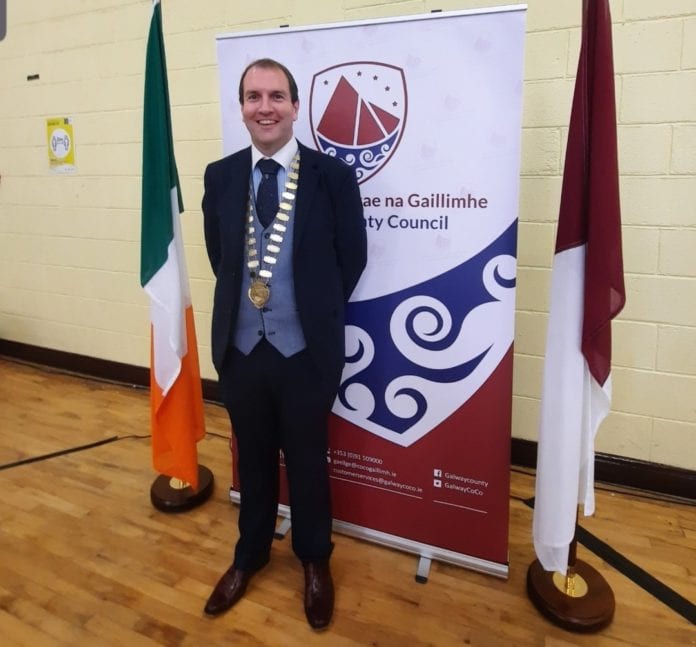 Councillor James Charity, the new Cathaoirleach of Galway County Council, has said that the past two weeks have been a hectic start to his one year post, and thanked all the people who have sent him messages of support.

In a video message released this week Cathoirleach Charity said that he’s had a “very busy introduction to the job”, meeting with the Chief Executive to plot the council’s direction for the coming year as the county continues to reopen from the COVID-19 crisis.

The county council also held its monthly meeting this week, where it addressed a number of issues including a new Housing Allocation Plan, and a €6.2 million scheme to retrofit public lights with LED bulbs.

“It’s been a difficult few months for our county, indeed for the state as a whole, and we’re slowly getting back to normal, both in Galway County Council and around the county,” James Charity said.

Galway County Council has this week reopened a number of public services which can only be done in person on a phased, incremental basis.

Wherever possible, people who have business with the council are asked to continue to do so online over the phone.

He added his congratulations to the businesses reopening this week, “and assure them that we as a council will be doing everything we can to support them.”

“It’s a trying time, we’ve only gotten where we are by the efforts everyone has put in to date, and we have to continue to ensure that we do everything we can to deal with this pandemic.

Business Restart Grants are currently being processed by the county council, but cllr Charity encouraged more to seek them “sooner rather than later”, noting that only a third of eligible businesses have applied to the scheme.

He concluded by saying that he looks forward to working with people over the coming year, and that “we’ll have a busy time getting our economy and our county back where it should be.”