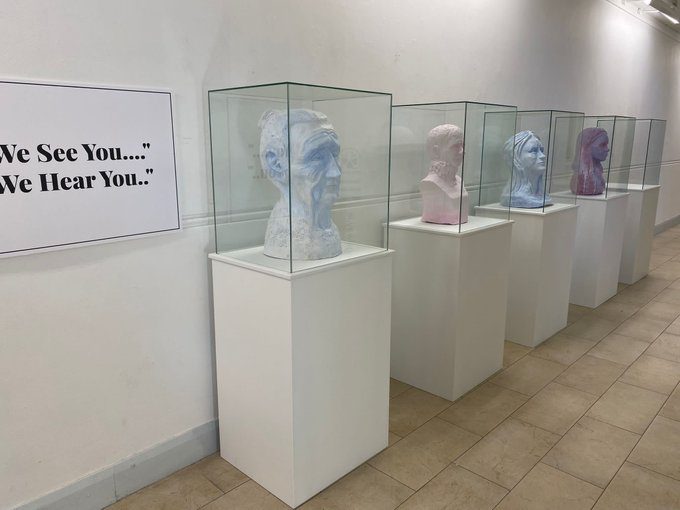 A new art installation commissioned by COPE Galway has been unveiled to the public in Atlantic Technological University (ATU) Galway.

The sculptural work, titled ‘We See You, We Hear You’, is by Galway artist Maura Finnegan and was commissioned by COPE Galway Domestic Abuse Service to mark its 40th anniversary.

Maura Finnegan created the piece in collaboration with women who have engaged with COPE Galway’s Domestic Abuse Service and members of its staff.

Six of the cases contain heads sculpted from plaster that depict different women, and each one has a QR code that connects to an audio recording of an anonymous COPE Galway service user telling the story of her real experience of domestic abuse in her own words.

A seventh box is left empty to represent women who have lost their lives due to domestic violence.

The charity chose Monday to launch the artwork in observance of the annual UN-supported 16 Days of Activism against Gender-Based Violence campaign that is currently taking place internationally.

Describing the piece, the artist Maura Finnegan, who is a graduate of the MA Creative Practice course at ATU, said she chose to sculpt the head and face of women from a diverse age and cultural demographic, six in all, representative of Galway city and county in contemporary society.

“The sculpted heads embody silence, a word which occurred frequently in collaborative conversations with both the staff and clients of COPE Galway.

“While the sculptural figurative forms remain entrapped in silence, their words can be heard privately in audio files, accessed through your smartphone via a QR code to COPE Galway’s website.”

Speaking at the unveiling of the sculpture, Training and Development Lead with COPE Galway Domestic Abuse Service, Jackie Carroll, said: “It’s always a privilege to work with survivors of domestic abuse and getting their input into this significant art project was hugely important.

“As we look back on 40 years of our domestic abuse service provision, I hope that the sculpture will raise awareness and I hope other women come forward and get the support needed.

“We know that significant numbers of women in every community experience domestic abuse. One in five women in Ireland will be abused by her partner at some stage in her life – and these women come from all walks of life. Abuse is not confined to any class, culture, creed or career.

“It takes many forms, including digital. By highlighting the issue within a public space, we are showing our support to those women and their children. By engaging with this art project, our communities are supporting us in saving lives.”

“It’s important to commemorate their work over the past 40 years, in providing vital support services to women and families.”

The ‘We See You, We Hear You’ art installation is going on public view in different locations in Galway city and county on the following dates:

For more details and updates about the COPE Galway Domestic Abuse Service ‘We See You, We Hear You’ art project, see www.copegalway.ie and its social media channels.

The ‘We See You, We Hear You’ art project was commissioned in partnership with the ATU Galway Radius Project and it is supported by Medtronic.