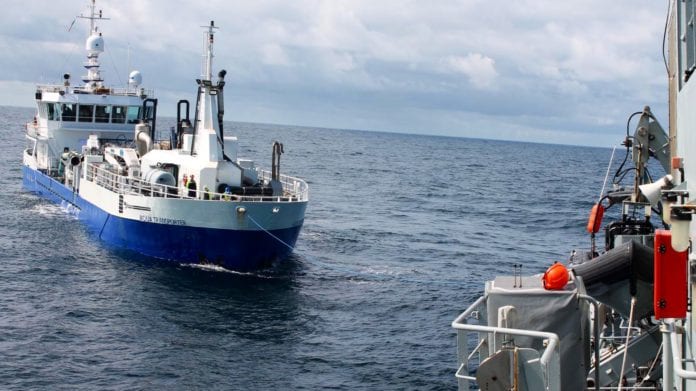 The Irish Naval Service have been praised for rescuing a tanker ship full of oil drifting towards a rocky stretch of island off the coast of Galway this week.

Shortly before midnight on Sunday, the LÉ Niamh responded to a call from the Coast Guard to a ship drifting without engine power off the coast of Galway.

At the time of the callout the cargo ship was adrift 9 miles south of Slyne Head after suffering an engineering breakdown.

The 60m long Aqua Transporter was carrying 32,000 tonnes of fuel, and 2 metric tonnes of lubricant oil, which could have had disastrous environmental consequences in the event of a crash.

On Monday the LÉ Niamh took the damaged tanker under tow just 4 nautical miles west of Skedmore Island after it had drifted closer to land overnight.

Under the command of Lt Commander Claire Murphy, they towed the damaged ship to safely anchor in Galway Bay.