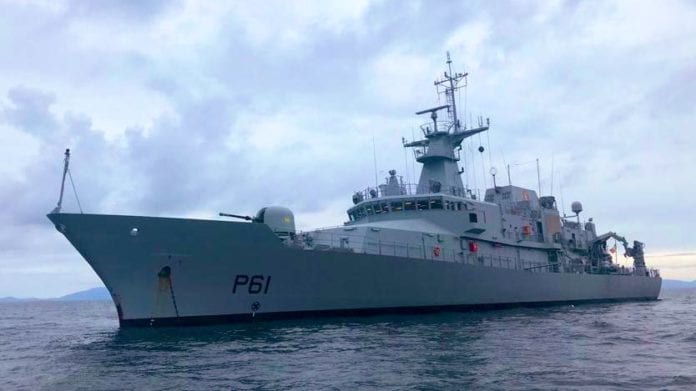 The Irish Navy patrol ship the LÉ Samuel Beckett will be open for public tours in Galway next week.

The Navy patrol vessel is anchoring alongside Galway on Monday June 24, and the crew will be giving guided tours from 2pm to 4pm.

The LÉ Samuel Beckett is one of four new patrol vessels build for the naval service since 2014.

They are often called the four “playwright” sisters because of their names.

The number of active service members in the Defence Forces has dropped below 9,000 with pay levels for enlisted members one common issue raised.

LÉ #SamuelBeckett (#P61) will be open to the public for guided tours by the ship’s crew alongside #Galway tomorrow Monday the 24th of June 14:00-16:00. @defenceforces is currently recruiting #joinourteam #ÓglaighnahÉireann pic.twitter.com/iyJA4zK9hl

The duties of Irish patrol ships include looking for illegal fishing vessels and narcotics smugglers in Irish waters.

They also take part in marine rescue missions and deployments to the Mediterranean to combat human trafficking.