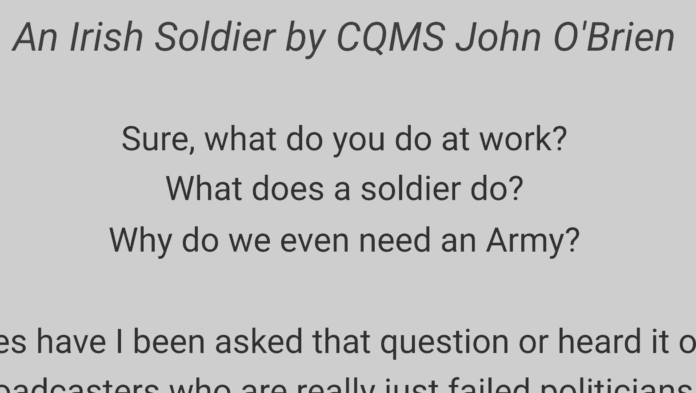 Local senator Gerard Craughwell has endorsed a poem dedicated to Private Seán Rooney who was killed in Lebanon this week.

Sergeant John O’Brien’s poem An Irish Soldier discusses Private Rooney and the sacrifices made by those who serve in the Defence Forces.

Senator Craughwell said the poem will resonate with anyone who has ever served their country.

“I can’t take any credit for this tribute,” he said. “But I believe this poem is very powerful.”

Sure, what do you do at work?
What does a soldier do?
Why do we even need an Army?

How many times have I been asked that question or heard it on the airwaves
asked by self-serving broadcasters who are really just failed politicians or failed businessmen?

What it means to be an Irish soldier has been shown today by a 23-year-old lad from Dundalk,
when he stood up and, in typical military style, joined the stand taken by his father before him,
and his Uncles, and like all within the job, he took a stand to say “I will be there”.

We don’t dance around with the tricolour on St Patrick’s Day,
we wear it every day,
we stand to attention as the flag is raised,
we stand and watch as the flag is saluted,
and then lowered that evening.

An Irish soldier stands when he is called without quibble or question
and his resolve is tested when he swings up his arms.

They question whether we’re needed but call us whenever we’re needed.
We stand, and we answer the call like we have been given a call to arms.

Our training, our professionalism, our drill, and our dress.
The standard is set by a brotherhood and loyalty to one another, not the government of the day.
The politicians who won’t fight for our simplest of needs promise white papers and reform.

A soldier is reliable but not to his family.
Can I guarantee I will be around this weekend? Not always.
“I will go overseas; it’s got a financial gain; it will help us at Christmas.”

Conversations are had by so many Comrades as they discuss military life.
Now the conversations have changed,
“Why did you join the Army?”
At one time, it was a viable career,
because it had prospects for promotion,
and because it’s a family tradition.

You become a brotherhood who stand as a defensive line in Riot gear.
You stand together in best dress to pay respects in a Guard of Honour.
You stand side by side on a gun line as mortar bombs fly.
You stand in memorial as a Comrade is laid down.

So whenever you’re asked, what do I do as an Irish Soldier?
I stand ready; I take my place in line and wait to be called to do what’s needed.

Pte Sean Rooney stood ready, took the call and did what he did
because he was and forever will be an Irish Soldier.
God bless you, soldier.
Your duty is done.