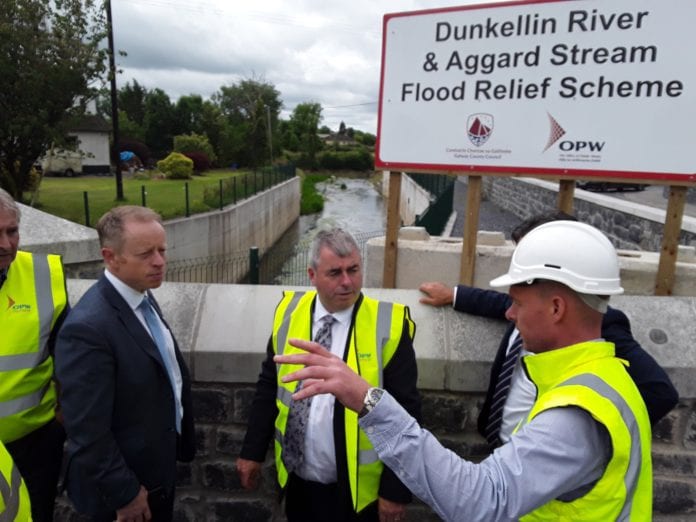 Minister for Public Works Kevin Boxer Moran toured South Galway this week to hear from locals the effects that flooding and coastal erosion is having on communities.

Minister Moran met with members of the South Galway Flood Relief Committee where they argued for significant investment in flood relief to end flooding in south Galway once and for all.

The meeting was attended by Galway West TD Ciarán Cannon and several other local representatives as well as the Relief Committee and Minister Moran.

Deputy Cannon said that David Murray of the South Galway Flood Relief Committee made a “succinct and well argued case for flood relief investment that will end flooding in South Galway once and for all”.

The Minister also visited Dunkellin Bridge which is undergoing reconstruction after a span of it collapsed last year, to which the OPW has committed €200,000.

Work is also taking place on a flood relief scheme for the same area while the new bridge span is being constructed.

County Councillor Martina Kinane brought Minister Moran to visit Tawin Island, Maree and Renville Point on Friday to see the effects of coastal erosion in the area and listen to members of the local community.

The visit was organised by Galway West TD Eamon Ó Cuív and was also attended by Deputy Anne Rabbitte.

Cllr. Kinane said that “Minister Moran has given a commitment that his Dept. will work with us on this matter.I will provide further update regarding the outcome of our meeting over the next couple of weeks.”

COVID-19: No cases in the ICU at Portiuncula hospital

The Intensive Care Unit at Portiuncula Hospital in Ballinasloe has no COVID-19 patients according to the latest figures from the HSE.As of Thursday evening...
Read more
NEWS

Work is due to be completed by the end of this month on replacing several hundred metres of aging water mains in the Monivea...
Read more
LIFE & STYLE

COVID-19: No cases in the ICU at Portiuncula hospital