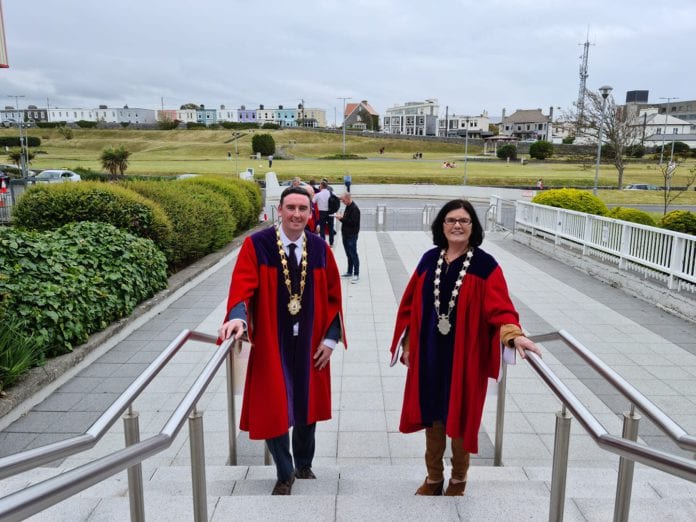 Councillor Mike Cubbard has been elected to a second term as Mayor of Galway City today at the City Council’s Annual General Meeting.

Councillor Colette Connolly was also chosen to serve as Deputy Mayor at the meeting, which took place in Leisureland in Salthill this evening.

Independent Cllr Noel Larkin was the one to propose Cubbard for the continuing role as first citizen of Galway at the AGM today.

This is the first time since 1967 that a Mayor has been chosen to serve back to back terms in Galway City.

“I am extremely grateful to the members of the pact for then agreeing to this but equally to members of both Fianna Fáil and Fine Gael who did not oppose my nomination,” Mike Cubbard said today.

“I am beyond proud to have an endorsement from the entire elected council and will again work with all of them to do my best for Galway.”

“Karen Cubbard and my boys are by my side as always as are my family, friends and campaign team. I will again do you proud.”

“Thanks to all my supporters in Westside and all Galway City Central.”

Mike Cubbard was the first councillor chosen to serve as Mayor under the pact of Independent, Greens, Soc Dems, and Labour which has controlled the city council since last year’s local elections.

Under that agreement Cllr Larkin had been meant to take over as Mayor this year, but a number of elements have cast doubt on that in recent days.

Earlier this week Cllr Mike Crowe said that Fianna Fáil’s councillors believed that Mike Cubbard should remain on “without conditions” for another year.

He also stated that they were against the nomination of Cllr Larkin.

The @fiannafailparty Cllrs on @GalwayCityCo having considered everything,believe it only right and proper that @Mcubbard remain on as Mayor for the next year. We support that proposition without conditions. Separately, for the record we will oppose Cllr Noel Larkins nomination.

People Before Profit opposed his nomination, stating concerns about his attitude towards travellers and immigrants, and organised a protest outside Leisureland today before the council meeting.