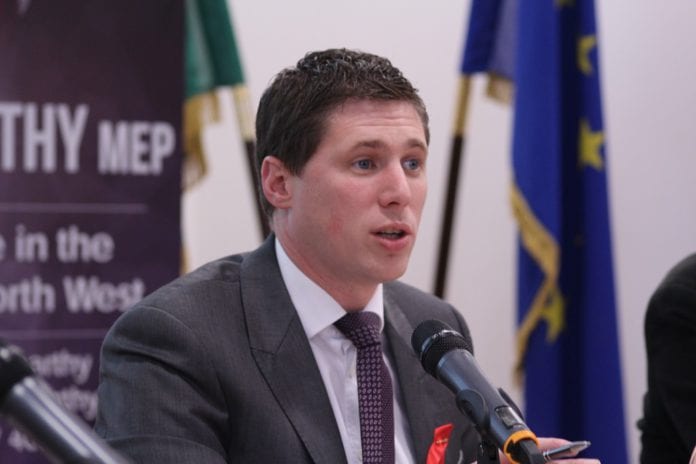 The Sinn Féin MEP demanded an end to the closure of vital services in rural towns and villages, saying that rural Ireland must be made a sustainable place to live and work and that this required a fundamental change in Government policy.

Speaking at the meeting at Maam Cross in Co. Galway, which was also addressed by Sinn Féin’s Galway West representative, Cllr Mairéad Farrell,  he said that rural Ireland is under attack as never before.

“Rural schools, Garda stations and post offices have been closed at an alarming rate.

“Meanwhile small and medium business have been starved of credit and neglected by the Government so that many rural towns are simply dying on their feet.

“There is now a major threat to 800 more post office branches across the state. This cannot continue,” commented Matt Carthy.

Calling for a fundamental rethink of government policy, Carthy said all parties had to recognise the need for significant investment in rural counties:

“Crucially, this means thinking big for rural Ireland and for the West. There is no reason why parts of many rural counties haven’t got decent broadband, no prospect for international investment or why so many young people continue to leave home in order to get jobs.

“There is no reason other than the fact that Fianna Fáil and Fine Gael governments haven’t and won’t invest adequately in the infrastructure and services we need.

“Sinn Féin has a vision for the west of Ireland Ireland. A vision to make it a sustainable place to live and work. A place where the quality of life is matched by the quality of public services.

“This includes a policy commitment to keep rural post offices, libraries and Garda stations open and to maintain services that connect people with their local towns.

“The West needs to become a place where young educated graduates have the opportunity to stay and build their future and a place that welcomes back emigrants including those forced to leave over recent years.

“Unfortunately, Government policy continues to prioritise the east coast. But there is no economic justification for this – all of Ireland would benefit from balanced regional development.