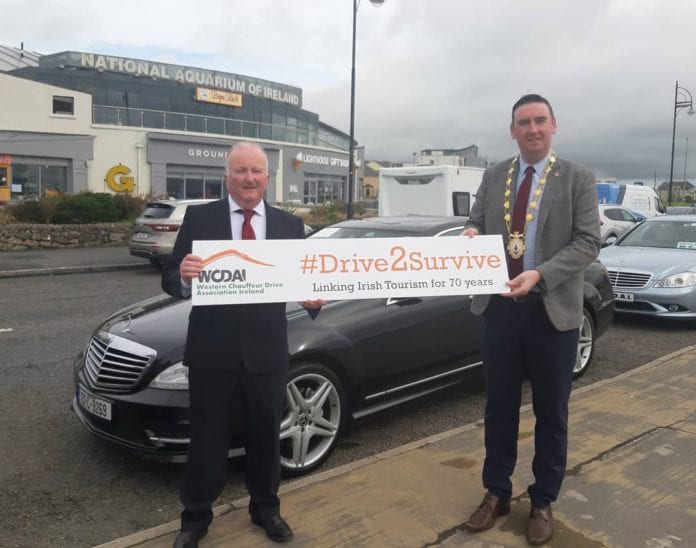 Mayor of Galway City Mike Cubbard has expressed his support for a campaign by chauffeurs highlighting the impact the drop in tourism has had on their sector.

The Western Chauffeur Driver Association of Ireland has been on a three day Drive2Survive from Kerry to Donegal this week to raise awareness of the troubles in their industry in the absence of so many popular tourist events.

Mayor Cubbard met with the campaigners in Salthill on Saturday as they stopped in Galway, and expressed his support for the campaign.

“This group of chauffeur drivers who have built up their businesses and connected Irish Tourism for over 70 years have seen their livelihoods wiped out with COVID-19.”

“The National Transport Authority have refused to engage in any meaningful conversation and the July stimulus package fails to support this sector. This must change.”

“They are driving in convoy from Kerry to Donegal and stopping in the hardest hit tourism hotspots to get the support of the various tourist attractions, retailers etc. for their campaign.”

The Drive2Survive campaign is about highlighting how chauffeurs act as a “conduit to all the small tourism businesses in rural Ireland,” a statement from the WCDAI said.

“We bring visitors from Irish airports to all the towns and villages in rural Ireland where SMEs like ours are now hurting and concerned for their futures.”

“The Drive2Surive is an act of solidarity with all businesses that would be otherwise open and trading at this time of year, viable tourism businesses like ours that bring so much to the Irish Tourism Industry.”