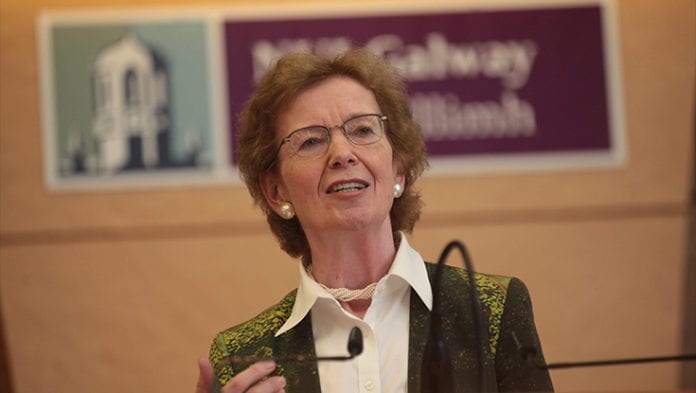 Former president of Ireland Mary Robinson spoke at length about climate change at a sold out talk at NUIG for Galway International Arts Festival.

She stressed the importance of each individual to make up their mind to do something to fight climate change whether it’s “recycling, or switching off lights, or using less water, or getting rid of waste, or using public transport”.

The former president urged the governments of rich countries like Ireland to be ambitious in their plans to deal with this pressing issue while making sure these plans are implemented, the Irish Time.

She maintained that there is a potential to change things since “Scientists say it is possible if we have the political will” while calling on the need for sustainable development goals.

Ms. Robinson challenged people to “imagine this world we are hurrying towards” as she referenced claims by scientists who say we have 12 years for the planet to change direction.

With that deadline in mind Mary Robinson urged the public to “get angry and get active” when it comes to protecting the environment.

Ms Robinson described climate change as a “man-made problem with a feminist solution” while referencing a UN Declaration from women leaders, stating it was “the time has come where women have to take over”.

She pointed out that “man-made” was a generic term, and feminists include women and men while stating “feminist solutions need more men” looking to solve climate change based on equality and fairness.

Mary Robinson’s talk on climate change was organised as part of a series of talks by the Galway Arts Festival.

Next Saturday, the Green Party leader Eamonn Ryan will be speaking to some Galway students at a talk entitled “The Next Generation and Climate Change”.