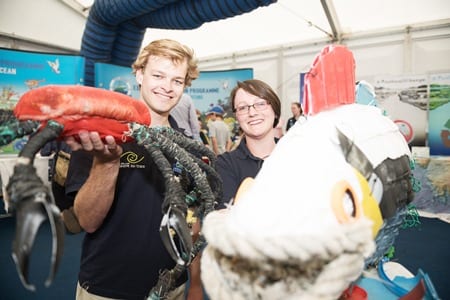 Galway’s Marine Institute is going to the National Ploughing Championships this week to highlight the terrible impact of plastics in our oceans.

Together with Leave No Trace Ireland, the Marine Institute will be teaching people about how plastic from bags and bottles, right down to clothes fibres from washing machines, makes it way to the sea.

Visitors to the Leave No Trace – Explorers Education stand at the Ploughing Championships will see just how long single use plastics can hang around in nature before they break down.

“A truckload of plastic waste finds its way into the ocean every minute of every day, and it is estimated that by 2050 there could be more plastic by weight than fish in the ocean unless behaviours change,” said Maura Lyons, CEO Leave No Trace Ireland.

“Although we are all contributing to this world wide epidemic, recent campaigns such as say No to Plastic have generated an amazing amount of supporters at community levels, particularly with children and families wanting to create change.”

Research conducted in Ireland and around the world shows plastic waste is already having a massive impact on the marine environment.

A recent oceanic by the Marine Institute experts found unprecedented levels of microscopic plastic particles in the ocean.

To help tackle this the Institute and Leave No Trace want to help people cut down on single use plastics that just keep piling up.

They’ll have some handy tips on how to transition to as plastic free a lifestyle as is possible in this world.

Those who come to the Explorers display boat will also get to see some of Ireland’s marine species typically found in rock pools along the coast like dogfish, plaice and starfish.

“It is great to see an increased interest from children, schools, communities and businesses in Ireland that have already committed to reducing single-use plastics by offering alternatives for customers,” said Ms Lyons.

“These small changes can result in big impacts, which will help encourage a change in behaviours. Attending the Ploughing Championships we would love to see the wider communities and decision makers engaging in saying No to Plastic and help ditch single use plastics completely.”

The National Ploughing Championships are on this week in Tullamore, Co. Offaly from Wednesday, September 19 to Friday, September 21.

Anyone who wants to hear more about how to live as plastic free a life as they can should go to the Leave No Trace stand at Block 3; Row 13; Stand 279.