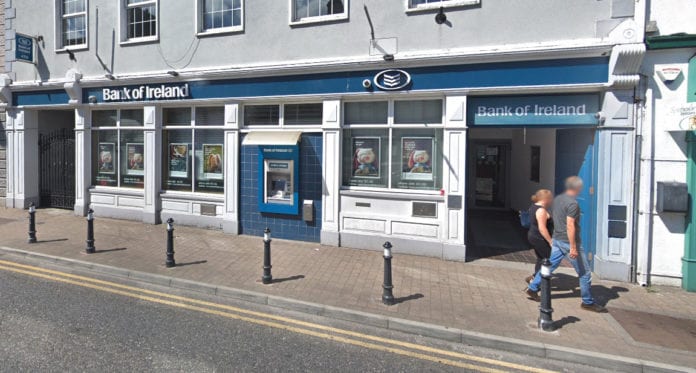 The premises for the Loughrea branch of Bank of Ireland is on the market for nearly €2 million.

The sale is part of a portfolio of eight Bank of Ireland branches whose properties are being sold for a target price of more than €10 million.

At a valuation of €1.89 million, the building on Main Street, Loughrea is the highest priced property in the portfolio.

According to the Irish Times the Layden property group is selling 8 of the 15 Bank of Ireland branches it acquired during the financial crisis.

Several of the advertised properties had previously been put up for sale earlier in the year but failed to attract any buyers.

All eight of the properties listed on online bidding platform BidX1 are leased to Bank of Ireland until 2032.

After Loughrea, the next most value property in the portfolio is the Ballyfermot branch in Dublin, with a guide price of €1.75 million.

At the previous sale attempt the price for this branch was set at €2.14 million, while the Loughrea branch was listed at €2 million.

The leases for each of the branches only allow for upward rent reviews every fifth year.

The Layden group is owned by developer Joe Layden and its directors are his daughters Gwen, Siobhán and Anita and his son Jack.

Back during the financial crisis the Layden group paid €94 million for portfolio of Bank of Ireland properties that includes 29 retail locations and its call centre in Kilkenny.

The most notable other investments made by the Layden group include George’s Arcade between South Great George’s Street and Drury Street.

Since the crash the company has spent another €22 million buying up investment properties in Dublin.