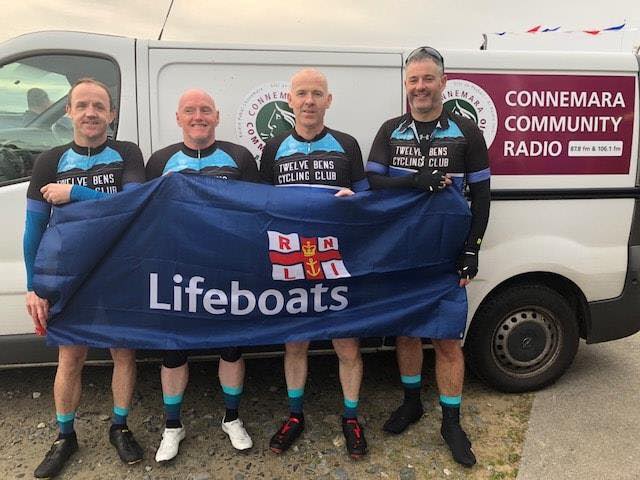 Four friends from Galway who cycled 300km from Dublin to Clifden in a single day while wearing lifejackets raised €6,444 for the Royal National Lifeboat Institution.

The group are all cycling buddies from the Twelve Bens and Western Lakes cycling clubs.

As well as raising money for the charity lifeboat service, the trip was to promote awareness of water safety, hence the wearing of the lifejacket.

“If we can wear them, so can you,” as Rob put it at the end of their epic sage.

The fearsome foursome set off in the wee hours of the morning, leaving Swords RNLI station at 4am last Sunday.

After 14 relentless hours into the west they made it into the RNLI station on Clifden beach to a hero’s welcome from friends and family.

Rob took to Facebook to thank everyone who donated to the cause and helped them organise, their cycling club teammates, and the Westwood Hotel in Galway for looking after them when they got home.

“But I have to give a special mention to the lads, John James, Ciaran, and Danny. Thank you for all the effort, how will we top that,” he said.

Tony Mullion of Mullion Lifejackets loaned them a set of lightweight gear for the trip.

Nearly 100 people donated, raising almost €6,500 for the lifeboat service, more than twice the fundraising goal that was set beforehand

The RNLI is a rescue charity that saves lives at sea across Britain and Ireland, providing 24/7 coverage from 238 lifeboat stations.

A 95% volunteer organisation, it relies on public donations to support it in its work alongside the Coast Guard and other lifesaving institutions.

The page for donations is still open if you want to contribute to this worthy cause.