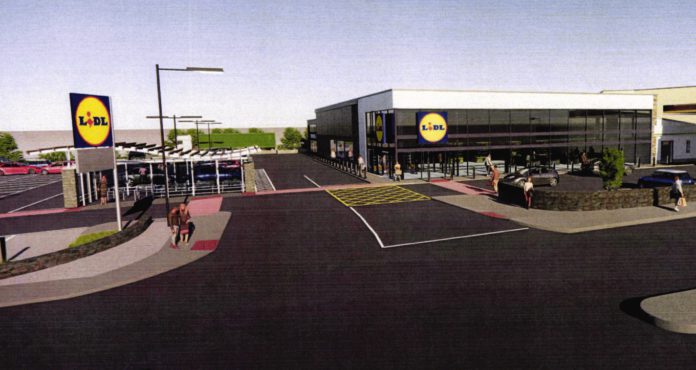 An Bord Pleanála has refused planning permission for a Lidl supermarket in the Westside area of Galway City, upholding the council’s decision.

Lidl sought approval to demolish most the former Arch Motors dealership on the Seamus Quirke Road to make way for a single storey supermarket, with another retail unit attached.

The adjoining Monaghan’s Westside Shop and Filling Station was to be left intact, and a small portion of the former Arch Motors premises there would be converted to shop use.

Galway City Council refused planning permission for the project in November of last year, based on the C1 zoning of the site.

This development would go against the specific objective to only allow “bulky goods retailing and local retail needs” on C1 lands at this location, the council said.

Objections to the project were submitted by the HSE, Tesco Ireland, and the Retail Retail Grocery Dairy & Allied Trades Association.

The HSE was specifically concerned that the development would interfere with the safe operation of the helipad for University Hospital Galway located behind the site.

Lidl appealed the council’s decision, arguing that this would be a smaller, locally focused supermarke, with the plans reduced in scale from the first application.

This is the second time that An Bord Pleanála have shot down plans for a Lidl store at the former car dealership site.

The appeal also stated that the council had adopted an extremely restrictive interpretation of the zoning objective, which was hindering development on the lands.

Lidl also said that local retailing needs are changing, and that new and emerging patterns and policy considerations were not taken into account.

The council’s decision also stated that the site was adjacent to the Westside District Centre, but Lidl argued that too much consideration was given to the District Centre designation, the boundaries of which, it was also argued, are unclear.

The appeal also said that there is no potential for adverse impact on the operation of the UHG helipad.

An Bord Pleanála ultimately rejected the plans once again, giving an identical reason to the council’s, based on the zoning objective of the site.