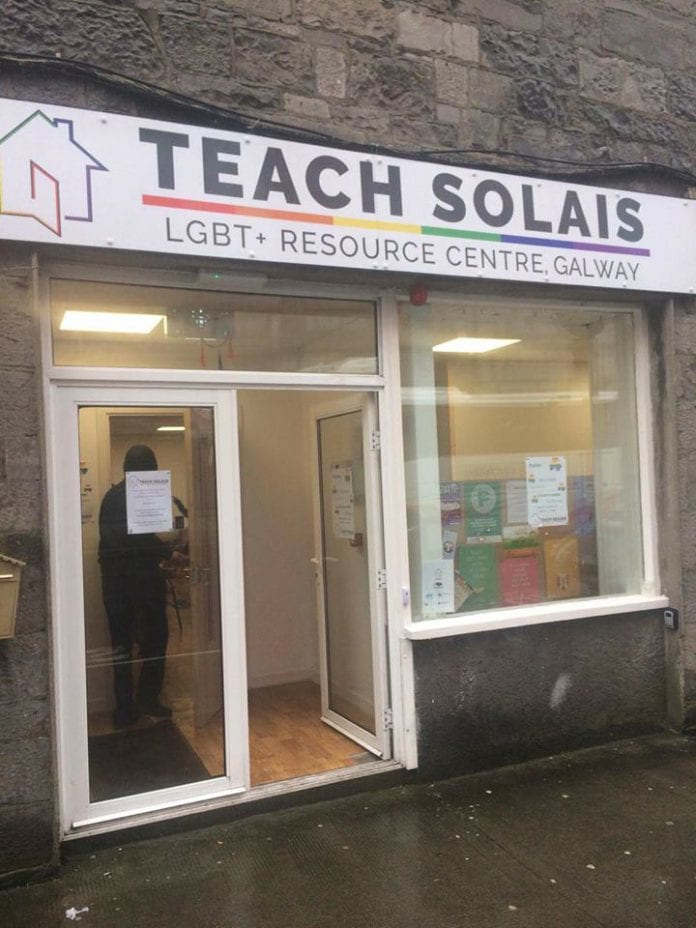 Teach Solais, a crucial hub for the LGBT+ community in Galway, could be forced to shut its doors this year because of a funding crisis.

Amach! LGBT Galway, the charity which operates Teach Solais as a resource centre for LGBT+ people, has warned that unless sustainable funding is secured the centre will not be able to remain open past November.

A number of important health and wellbeing services operate out of Teach Solais including the Galway branch of the National LGBT helpline, peer support groups, and free HIV testing by AIDS West.

There are also a many specific community events that use Teach Solais at Victoria Place as their venue such meditation and yoga class, sports such as the Running Club and Soccer team, and health initiatives recently enabled by funding from Health Galway.

All of these would face an uncertain future if Teach Solais closed, at the very least being forced to fund alternate venues which would take time and money.

AMACH! LGBT are fully reliant on funding applications, donations and fundraisers and are dependent on a volunteer board and community volunteers in order to keep this valuable service open for the LGBT+ community.

This is in stark contrast to other resource and outreach centres in Cork, Dublin, and Dundalk which receive ongoing funding for core staff, overheads and other operating costs.

AMACH has applied for funding from the HSE on three separate occasions over the past three years, two of which were unsuccessful and one that went through but only awarded €1,000.

In a statement the group said they “appreciate that the HSE is under pressure to fund many worthy health and wellbeing services.”

But added that, “this is truly a disappointment for this voluntary group that caters for an under-resourced minority group in the west of Ireland.”

To find new ways to tackle the issue AMACH! have invited all city and county councillors, and all Dáil representatives, to a meeting on Friday 29th March at 7.30pm in Teach Solais, LGBT+ Resource Centre.

All organisations and individuals that make use of the centre’s services are also invited to attend.

In a dire warning Amach! has said that without a solution, then based on their current income and expenditure Teach Solais will close this November.