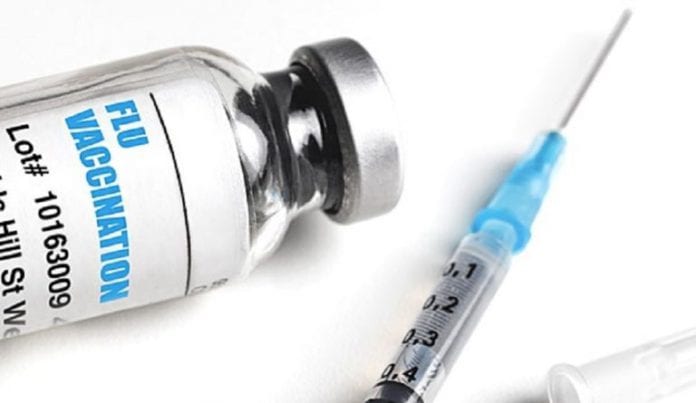 Only 17.9% of healthcare workers at University Hospital Galway got the flu vaccine for the 2016/2017 flu season, one of the lowest uptake rates of any hospital in the country.

The latest figures come from the National Healthcare Quality Reporting System’s 2017 report which found that at least 20% of healthcare workers are affected by the flu each year, and many continue to work at hospitals while infected.

Portiuncula Hospital had a better uptake among its staff, where more than a third of healthcare workers receivied the flu vaccine.

But the Saolta Health Group which covers UHG, Portiuncula, Roscommon County Hospital, as well as Sligo, Mayo, and Letterkenny General Hospitals, had the lowest overall uptake of the vaccine of any hospital group at 20.7%.

Outside of the Saolta Group, the survey also gathered data from Bon Secours private hospital in Renmore, where there was only a 14% uptake rate for the vaccine among staff.

According to the HSE the flu affects 5% and 15% of the population every year, and while most will recover with bed rest and by staying hydrated, influenza can be deadly for the elderly or people with chronic medical conditions such as COPD.

Getting the flu vaccine is important for healthcare workers, not just to protect themselves, but also their patients. Studies have shown that patients are 35 times more likely to contract influenza in hospital if they are exposed to an infected patient or staff member.

Between 200 and 500 people are estimated to die from the flu in Ireland every winter, mostly older people. The HSE said that vaccinating healthcare workers has been shown to reduce flu related deaths by up to 40%.

The survey conducted by the Department of Health received data back from 51 hospitals in Ireland. It found that Children’s University Hospital in Dublin had the highest vaccination rate in the country by a significant margin at 63.7%.

The lowest vaccination rate in the country by was at Lourdes Orthopaedic Hospital in Kilkenny, where only 6.4% of staff got vaccinated that year.

Within the umbrella grouping of “healthcare workers”, the report said that Dental and Medical staff have the highest uptake rate, with more than half getting the jab, while just 27% of nursing staff did.

Rather than going by calender year, the survey measures vaccination uptake rates between September 2016 and August 2017. People are encouraged to get the flu vaccine in September or early October of each year.

While its recommended that everyone get the flu vaccine each year, especially if you work in a crowded environment where germs can be spread around easily, the shot is never completely effective and it is still possible to contract influenza despite getting vaccinated.

Overall, the 2017 report shows that flu vaccination rates among healthcare staff hover at just over a third across Ireland, however that information is provisional and could change.

Despite this, the positive news is that this is the highest figure recorded yet, and vaccination rates among healthcare workers have been going up consistently since 2011.

The HSE set a goal of a 40% vaccination rate among healthcare workers, however only 14 hospitals achieved that in the 2016/2017 flu season.