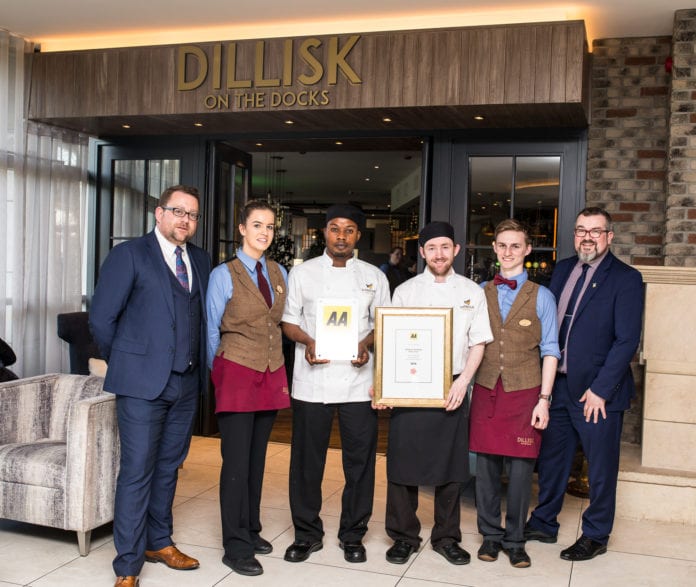 Dillisk on the Docks is celebrating its first birthday this week and it couldn’t ask for a better birthday present than being awarded its first AA Rosette for culinary excellence!

The excitement didn’t stop there as Harbour Hotel Galway, where Dillisk on the Docks is located, received four-star status.

One of the most prestigious awards in the industry, the rosettes are given for quality of cooking and are similar in standard to a Michelin Star.

AA Rosette Awards are assessed as part of unannounced inspections and are a hugely respected accolade in the industry.  These Rosettes are awarded to restaurants serving food prepared with care, understanding and skill, using good quality ingredients.

These restaurants will be achieving standards that standout in their local area.

Dillisk on the Docks opened its door one year ago and the innovative cooking based on mouth-watering flavours, local seasonal supplies and fresh artisan ingredients by head Chef Patrick Anslow has been contributed to the winning formula of the kitchen.

It is based in Harbour Hotel, Galway situated on the docklands of Galway only minutes’ walk from Galway’s city centre.

Stephen O Connor, General Manager says: “We are absolutely thrilled with the AA Rosette. The main ethos behind Dillisk on The Docks isauthenticity, local, delicious and remarkable food and thankfully this has proved successful.

“We aim to consistently provide our customers with impeccable service by demonstrating authenticity and warmth with knowledge, professionalism and integrity in our work.A huge thanks to all the team that worked in Dillisk on the Docks since its inception a year ago.

“The Rosette is for them because of them!”

AA Inspectors were impressed by the range of dishes served in the Dillisk on The Docks which is overseen by Harbour Hotel Head Chef, Patrick Anslow who leads a team including Gary Meehan, Sous Chef.

Stephen O Connor added: “We are especially proud that within the same week Harbour Hotel received an AA 4 Star Status, this is in addition to its Failte Ireland  4 Star grading.

“This is down to the determination, dedication and professionalism of all the staff and again we are delighted with this extremely fantastic news!”