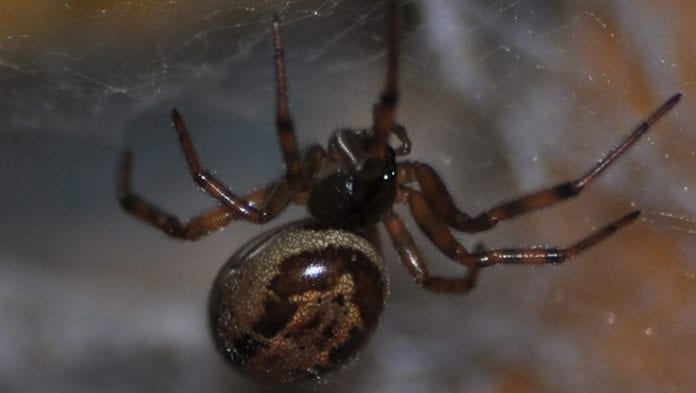 In what is sure to be good news for absolutely no-one, the Noble False Widow spider, already considered the most venomous in Ireland, may be even more toxic than previously believed according to new research from NUIG.

Scientists from NUIG and the University of Liege in Belgium investigating the genetic and venom makeup of the Noble False Widow found that it can potentially deliver and even more toxic bite than was previously believed.

They found that of 140 toxins found in its venom, 111 of those were also present in their more famous cousin, the true Black Widow.

This α-latrotoxins, the compounds known to disrupt the central nervous system of vertebrates, including humans.

Dr Michel Dugon, head of the Venom Systems Lab at NUIG, said that we still know very little about spider venom, and how it acts on the human nervous system.

However, he added that the False Widow is “here to stay” so it’s important to find out more about the creature and the dangers associated with its bite.

Originating from the Canary Islands and Madeira, Steatoda nobilis has since spread throughout Europe, North Africa, West Asia and parts of North and South America.

It has become one of the most common species of spiders in parts of Ireland the UK, favouring urban areas.

Venomous bites from them are also on the rise, victims of which can expect intense pain and swelling for a few days.

In some cases, victims have developed small wounds at the bite site, malaise and persistent stiffness in limbs.

But just as the majority of black widow bites are not serious, so far most of the recorded bites from false widows have been mild.

John Dunbar doctoral student at NUIG and lead author of this new study that though their work shows the venom of the False Widow spider may be more potent than previously thought, that doesn’t mean we need to live in fear.

“In many parts of the world even ‘true’ black widow bites rarely require medical attention.”