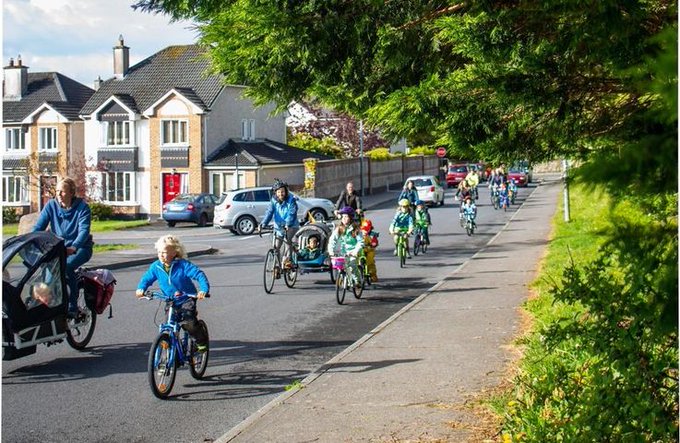 People of all ages and abilities have been invited to join Ireland’s first ever Cycle-Bus Festival at 11am tomorrow morning, 7 Sunday November, which is taking place in Galway city.

There will be musicians accompanying the big cycle-bus, as well as treats from Tribe Hospitality Group.

The cross-city cycle-bus will depart from outside the Quad at NUI Galway and enjoy a 4km route at a young child’s pace through Nun’s Island, over O’Brien’s Bridge to the Latin Quarter, looping around the Long Walk to Merchant’s Road, onto Eyre Square, and ending at Fisheries Field.

All are welcome to join: regular ‘passengers’ and volunteer marshals, families, friends, commuters, social cyclers, and people who are interested in joining, or starting, their own cycle-bus.

Reg Turner, organiser of East of the Corrib Cycle-Bus which began with just two families in May, said that this cycle-bus celebration is much needed in Galway. The original cycle-bus is now three years old.

“And since the pandemic ‘bike boom’, cycle-buses have popped up like wildflowers across the city, and nationwide too,” he said.

It was quickly followed by cycle-buses in Renmore and Salthill-Cappagh. There are now more than 20 cycle-buses across Ireland.

The four school cycle-buses that daily serve one third of all the city’s primary schools. Renmore Cycle-Bus pedals to Scoil Chaitríona and Gael Scoil Dara.

Martina Callanan of Galway Cycling Campaign and volunteer marshall, said that cycle-buses exist because it is not safe on our roads for children to cycle with their siblings and friends to school without adults behaving as human shields between children on bikes and buses, SUVs, and lorries.

“We do not have safe cycle routes to school,” said Martina. “With the bottomless pit of active travel funding available from the government, we look forward to a network of child – and disability-friendly cycle routes making us extinct, and a generation of young people for whom cycling is a normal and unremarkable form of transport.”